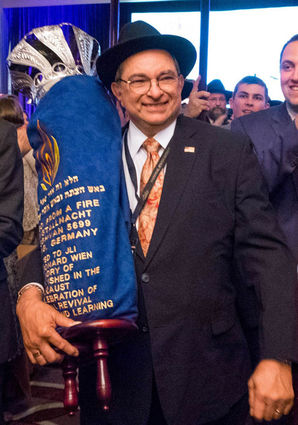 Seventy-eight years ago, a Torah scroll was sentenced to death along with the Jewish people. Now it will be in Orlando, as part of a whirlwind tour that will include hundreds of Jewish communities all across the globe.

On Kristallnacht, the "night of broken glass" when more than 1,400 synagogues were torched and 7,000 Jewish businesses were destroyed across Germany, 14-year-old Isaac Schwartz of Hamburg knew he had to act.

Seeing a pyre of Torah scrolls and other Jewish sacred items left unattended, he bravely doused the flames and attempted to recover the holy objects. His heroic efforts yielded a single Torah scroll.

A Torah scroll, which contains the Five Books of Moses, is the most sacred object in Judaism. An authentic handwritten parchment scroll can take up to a year to craft at the deft hands of a sofer (trained scribe). It is then stored in the ark in the front of the synagogue and read only during services.

As the situation continued to deteriorate rapidly, Schwartz had the scroll buried in the ground along with a number of other sacred items. There it lay for the duration of the Holocaust until it was retrieved by Schwartz and his family. But the trauma had taken its toll, and much of the scroll had been rendered unusable.

Recently, the relic was purchased from the Schwartz family by philanthropist Leonard Wien and donated to the Jewish Learning Institute, which operates hundreds of adult educational franchises at Chabad Centers across the globe.

Over a period of 18 months, a sofer painstakingly rewrote the faded letters and replaced parts of parchment that were beyond repair.

Having been finally completed, the newly refurbished Torah has been sent on a historic mission, hopping from community to community, in a spiritual gesture of unity that spans continents, cultures, and generations. The scroll travels in an attractive blue cloth covering inscribed with a dedication from Wien to those who died in the Holocaust and in celebration of the revival of Jewish life and Torah study across the globe. 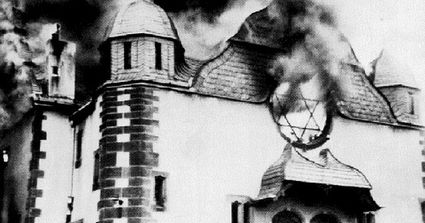 A synagogue in Hamburg, German, that was burned on Kristallnacht

On Saturday Nov. 11, just two days after the Kristallnacht anniversary, this historic scroll will be present at Nate's Shul in Longwood, where it will be used during the Sabbath services. Participants will be honored to carry, kiss and even read from its ancient letters.

"In this time, we are desperately in need of unity," said Rabbi Yanky Majesky who co-directs Chabad of North Orlando. "It is deeply poignant that we will be united in such a meaningful way with Jews all over the globe, our past, and our future."

Services begin at 9:30 a.m., Torah Reading at 10:30 a.m., Kiddush Lunch at 12:15 p.m. This event is free but we ask you RSVP at http://www.JewishNorthOrlando.com/Kristallnacht or 407-636-5994. Private viewings for journalists or groups are available upon advance request.