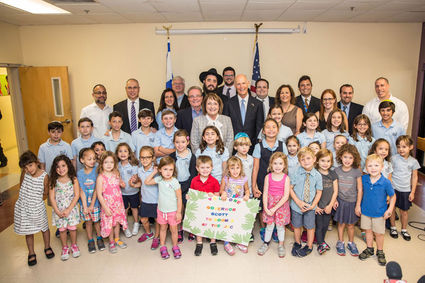 Last Thursday, Gov. Rick Scott paid a visit to The Roth Family JCC to announce his proposal of $1million to provide extra security to Jewish day schools throughout Florida. The monies would be ear-marked for security upgrades and other counter-terrorism measures, such as video cameras, fences, bullet-proof glass, alarm systems and other safety equipment.

He then stressed that the proposal still has to go through the state congress and encouraged everyone to contact their congressmen and state senators to get on board for this funding.

Asked if there has been any backlash from the proposal, the governor stated that the responses so far have been very positive.

Attending the press conference were students from the Jewish Academy of Orlando and pre-school children from the Richard S. Adler Early Childhood Learning Center. One student wearing a T-shirt that read "Future President" caught the governor's eye and he remarked to her that she certainly could be a future president (but she should be governonr first), and that every student can have the goal to be whatever they want to be.

"Our children should be spending their time learning and not feel unsafe," said the governor.

Last June, Scott visited the Orlando Torah Academy where he announced funds of more than $654,000 were designated in the State budget for security at Jewish schools. 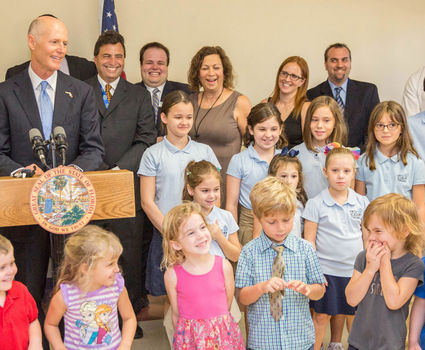 Before he addressed the group, Gov. Scott noticed that one little girl's T-shirt said "Future President" (on right with hands over mouth). He encouraged her to pursue her dream, but become the governor first.

Even though the Jewish Academy is on the JCC campus, funds will not be allocated to the JCC, Dvorchik explained. All the security enhancements that were done on campus were from the Campus Facility Maintance Committee (FMC) reserve funds and charitable donations.

The $654K and the proposed funds are designated for Jewish Day Schools K-12th grade.

Rusonik said the $654K funds have not been allocated yet and that the Jewish Academy, the Orlando Jewish Day School and Orlando Torah Academy have to apply for them. The applications are due next month.

As for the entire campus, Security Director Andy Brennan stated, "In order to ensure the safety of persons and property, the JFGO and the Maitland campus organizations continue to examine present security posture and future needs, giving due consideration to existing and/or potential threats."

"We have ongoing security needs that are currently not funded-the Federation has the security fund open for people to contribute," Dvorchik added.