Jewish Pavilion's Music Fest-A concert of note for the ages 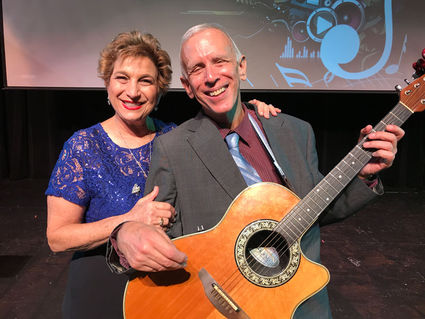 On a recent sunny Sunday October afternoon, Jewish Pavilion Board of Directors Chair Paul Stenzler shared with an audience of over 400 community members of all ages that "All of you will require the support or services of the Jewish Pavilion at some stage of life as your family matures."

Fulfilling this important community need happens only because of private contributions and small grants.

This music highlighted individual artists as well as duet and group numbers. Notable jazz musicians, Michael and Ben Kramer, moved the crowd with "Cosmos," an original, inventive piece, as well as a Frank Sinatra medley. Crowds applauded their improvisational style and father-and-son connection. The Kramers also accompanied entertainer Penny D'Agostino, who belted out the nostalgic "My Yiddishe Momme." Audience members nodded their heads and dabbed at the corners of their eyes, as the familiar tune stirred old memories. Barbara Jones and Howard Herman entertained the audience with popular jazz standards and a beautiful version of "La Vie en Rose" sung in French and English. Their rhythm section included bassist Larry Jacoby and percussionist Ron Sarro.

During a touching moment, Goldstein was called into a special performance during intermission by fans from Kinneret Apartments and other facilities. With the Kinneret bus scheduled to leave before the start of his performance, Goldstein played several favorites for the senior-living crowd, who defied age limits as they belted out their favorite tunes throughout the on-the-spot performance.

The second act opened with Goldstein singing "I'll be Loving You Always" as a special tribute to Inez "Teddy" and Myron Snyder, parents of Geanne Share who, along with her husband Adrian, were the main sponsors of Music Fest. The audience and a group of Music Fest performers joined together to sing "Edelweiss" led by Goldstein. Stein and Cantor Jacqueline Rawiszer left the audience giggling with the back-and-forth banter from "My Dear Mr. Shane" (BEI MIR BIST DU SCHON), and then teary-eyed with a sentimental performance of "Somewhere over the Rainbow." Stein then shared her original song written expressly for the Jewish Pavilion, "It's Always Been about Love," honoring her parents, the late Betty and Daniel Stein. Stein and Stenzler performed jazz standards written by Jewish composers and "Erev Shel Shoshanim" (Evening of Roses) in Hebrew. 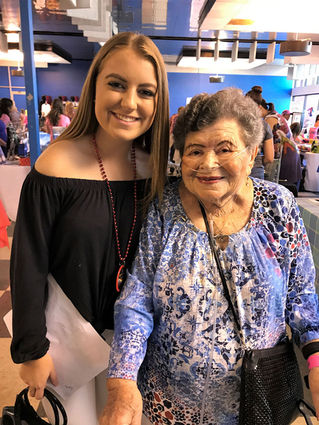 Music Fest introductory speaker and Lake Brantley High School Student, Ella Colley, with great-grandmother Ruth Abels of Brookdale Island Lake. What does a 15-year-old Lake Brantley student know about connecting with elders? More than 400 Music Fest attendees listened to what teen-aged Ella had to say about life with the Jewish Pavilion and her 100-year-old great-grandmother Ruth Abels.

The multigenerational affair featured participants from ages eight to 80-plus, including pint-sized singers from the Jewish Academy of Orlando to residents of senior-living communities including Brookdale Island Lake, Oakmonte Village Lake Mary, and the Kinneret apartments. Fifteen-year-old Ella Colley shared the impact the Jewish Pavilion has had on the life of her great-grandmother, Brookdale resident Ruth Abels (GiGi), including the celebration of GiGi's 100th birthday. Ella stated, "On top of the wonderful celebrations the Pavilion hosts, their main goal is companionship; to make every resident of senior-care communities feel loved. I can't even count how many times I've walked into GiGi's place and have seen Pavilion staff and volunteers sitting, laughing, holding hands, while sharing music and stories with residents."

Event Chair Shirley Schoenberger, commented, "Throughout the year, the Jewish Pavilion brings smiles and engaging programs to residents in more than 70 senior living communities throughout Central Florida. Once a year we host a fun communitywide event to bring attention to this growing population. This year we are engaging with seniors in twenty more homes than we did last year at this time. 'Thank you' and a hearty round of applause to our musicians, sponsors, vendors, volunteers, staff, and the Jewish Academy singers who 'were playing our song' to benefit the elders we love."

The Jewish Pavilion enhances the lives of residents of senior- living communities with friendly visits, holiday celebrations and engaging programs, bringing smiles to residents of all faiths.