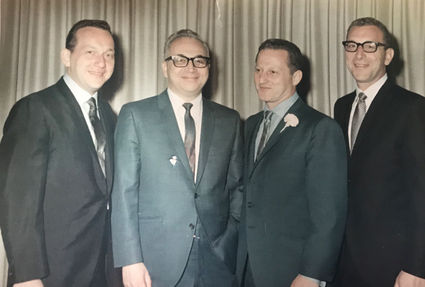 The four Witkov brothers, (l-r), the author's Uncle Lester, the youngest; and the three WWII veterans, his Uncle Dave, Uncle Sid, and his dad, Arthur.

According to my 93-year-old father, Arthur, the Witkov family had a ritual of sorts each time a son would go off to war. There would be a sendoff party of brave-faced family members, a new gift wristwatch presented by his Uncle Harry, hugs and handshakes, and a Blue Star placed in their Chicago Ashland Avenue apartment window (to show that a family member was serving in the armed forces).

My dad's oldest brother, Sid, was the first to leave home. Next in line was brother Dave. And then it was my dad's turn.

For my father, departure day also meant catching a streetcar to the local induction center and then heading for basic training. From there would be anyone's guess.

Present the morning my father was to leave home were two of his uncles, including Harry (and the wristwatch), his much younger brother, Lester, and, of course, his mother. My dad's father, a kosher butcher, had already left for work. He and my father had said their painful goodbyes the night before.

Gathering his thoughts that morning my dad was sitting by himself in their small kitchen. His mom, seeing her opportunity to catch him alone, entered the room with watery eyes. My father looked up. Their eyes met, and then she began to sob uncontrollably.

As my father tells it, he did not have to be a mind reader to know what his mother was thinking. Having three sons going off to war was more than she could bear. He stood up and wrapped his arms around her.

But she was inconsolable. Finally, she pulled herself together. Before not too long, my dad was out the door and on his way. And so, with handshakes, hugs, a new wristwatch, a mother's tearful exchange in private, and a third Blue Star placed in the window, an American family sent its third son off to fight in World War II. 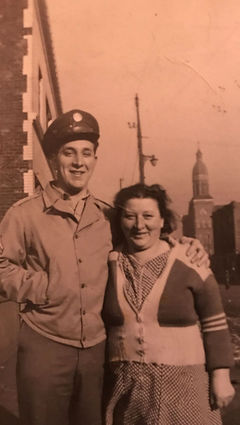 The author's father, Arthur, with his mother (the author's grandma) when Arthur returned to Chicago on furlough while stationed in the States before being deployed to Europe.

Back then, my family was not so unique, for every family had their own special way of sending a beloved son off to war. Across America, it happened by the millions.

Of course, this was not always the case in World War II, and it is not the case in any of our nation's wars and conflicts. Many of our best have fallen, and many have not returned whole.

This Veterans Day, let us not just honor our veterans and their sacrifices, but the sacrifices and tears of their family members as well. May we always be seekers of peace, and pray that when war is necessary, G-d and righteousness will be our strength and our shield.