By Christine DeSouza aka Lois Lane

'SupermanHPV' is on his way to conquer HPV-related cancer 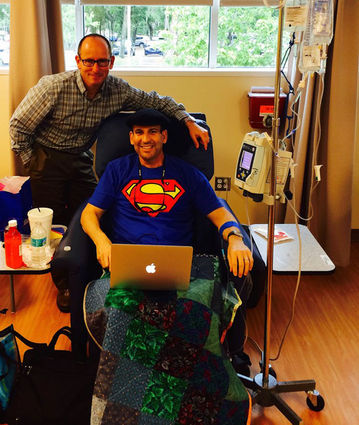 Jason Mendelsohn in his "Superman" t-shirt given to him by friends and a close friend, Russell Goldberg (on left), who is a partner at Withum, a CPA firm and on the board of Hillel at UCF.

It all goes back to April 2014 when Jason Mendelsohn, now 48, received the heart-stopping news that he had squamous cell carcinoma on his right tonsil. He was shocked. He didn't smoke, it was just a small bump on his neck. Later, his doctor confirmed that is was stage 4 HPV-related tonsil cancer. He probably contracted the HPV virus while he was in college, 25 years earlier.

Before the shock had time to wear off, he had a radical tonsillectomy, neck dissection (42 lymph nodes removed from his neck), seven weeks of grueling chemo, radiation and a feeding tube due to third-degree burns in his throat. But Mendelsohn was tough, so tough through it all that his friends called him Superman.

For many people who have overcome cancer, that's the end of the story, they go on to enjoy their cancer-free lives. But Mendelsohn was passionate about bringing awareness to HPV-related oral cancer. He had never even heard of HPV-related oral cancer until he was diagnosed, and that is what he hopes to change.

Before everyone gets panicky remembering their own wild youth and speculating if they could have HPV-related oral cancer, Mendelsohn stated that 90 percent of everything he saw and read about oral cancer was not HPV-related. Statistically, there are more than 100 types of HPV that can infect the lining of the throat. But not all of them cause cancer, and only two strains-HPV-16 and HPV-18-cause cervical cancer and head and neck cancers. Most people's bodies clear themselves of HPV, those diagnosed with oral cancer must test positive for HPV-16 through biopsies of the tongue, throat and tonsils. (To learn more about head and neck cancers, visit the Head and Neck Cancer Alliance, http://www.headandneck.org

Still, anyone diagnosed with an oral cancer should be checked for HPV-16. A team at the University of Florida, Baylor College of Medicine and elsewhere found that 11 million U.S. men and 3 million women were actively infected with oral HPV between 2011 and 2014, according to the researchers' report in the Annals of Internal Medicine.

Mendelsohn knew he had to get the word out about this specific kind of cancer because it can be prevented through the Gardasil vaccination given to boys and girls ages 9 to 26. He encourages parents to talk with their children's pediatricians about this vaccine.

The vaccine has been available for girls since 2007 because of the prevalence of cervical cancer. But it wasn't until 2011 that a vaccine was introduced for boys. And still many are not aware. Apparently, discussion of HPV with children is controversial.

The reason the vaccine is given at such a young age isn't because they are sexually active, explained Holly Boykin, executive director of the Head and Neck Cancer Alliance, but because the body can easily absorb the vaccine when given at this age.

Mendelsohn drew his inspiration to speak up from his sisters, Jamie Mendelsohn and Jill Theisen. Both women have suffered with Crohn's disease and colitis.

Even with all the inspiration and encouragement, one person can only do so much. You'd have to be super human to keep up. He remembered his friends and doctors who called him Superman during his treatments, and he adopted the name SupermanHPV.

"I chose the name SupermanHPV as I knew it would draw attention to the diagnosis, and help me spread the word about HPV-related oral cancer," he states on his blog. "I wanted people to understand that 3 out of 4 adults by the time they're 30 have HPV, 62 percent of freshman in college."

The next step was to start his own website and Facebook page, cloaking himself in the SupermanHPV image. The site, http://www.SupermanHPV.com, launched the first week of September and provides encouragement, inspiration and educational information to those diagnosed with HPV-related oral cancer.

SupermanHPV.com immediately drew national attention. After visiting the website, Maggie Fox, senior writer at NBC, wrote an article about him, which has been read by over 500,000 people. http://www.nbcnews.com/health/health-news/silent-epidemic-cancer-spreading-among-men-n811466.

He then appeared on NBC Nightly News with Lester Holt.

On the site, Mendelsohn tells his story, writes blogs and shares other people's testimonies of how they have recovered (often with encouragement from Mendelsohn), and they also share their own "words of wisdom" to encourage others with HPV-related cancer.

Doors just keep opening for Mendelsohn. He has met people wherever he goes who have shared with him their own account of being diagnosed with HPV-related oral cancer. He is currently speaking with and encouraging HPV-related oral cancer patients and survivors from Sydney, Australia to New York, Florida, Nevada, Michigan, Iowa and California.

It's amazing how he comes in contact with so many people through someone else. For example, while in Las Vegas on a business trip, he just happened to ask, "Is anyone familiar with the HPV vaccine?" The response was "No, what are you talking about?" So, he shared his own story. Two weeks later, Mendelsohn received a phone call from one of the men he'd been talking with. "Hey, Jason," he asked, "will you speak with my friend (who had just been diagnosed with HPV-related oral cancer)?"

Another time, he was flying home from Phoenix and he got a text from his father's best friend, "Jason, I've joined your club..." He was just diagnosed with HPV-related throat cancer. He was 74.

"This happens over and over again," Mendelsohn said.

People keep in touch with him about where they are in their treatment. He gets to the nitty gritty with them because he's been there. One man in Australia "never has a good day," Mendelsohn shared. "Please keep emailing me. I'm very worried," wrote the Australian.

"I email him almost every day," Mendelsohn stated, "because I had people like this who cared about me."

It was because of this personal level of caring that he was elected to the Board of Directors for the Head and Neck Cancer Alliance and serves as the co-chair for the Patient Education Committee.

"I wish I would have known about HNCA when I was first diagnosed... as I spent countless hours searching for answers to questions I had regarding HPV-related tonsil cancer," he shared.

Boykin, who also sits on the National HPV Board Round Table, knew Mendelsohn through mutual friends on the HNCA board. She asked Mendelsohn to speak at an event about HPV-related cancer in Seattle, Washington. They kept in touch and noting his enthusiasm, asked him to serve on their board.

"Early diagnoses is so important," Boykin said. "You might think it is just an allergy or a toothache. It is a horrific disease with complicated treatment plans. Jason is so positive helping those who are not sure of the process."

It is a perfect fit for Mendelsohn since HNCA's mission is to advance prevention, detection, treatment and rehabilitation of oral, head and neck cancers through public awareness, research, advocacy and survivorship. His story about recovery, "A New Normal," was featured in the Head and Neck Cancer Alliance quarterly e-newsletter. 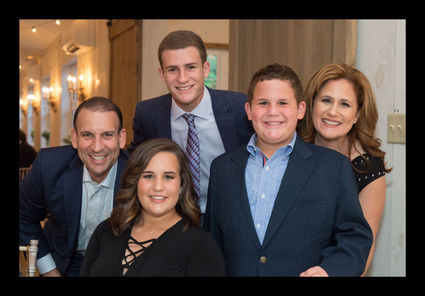 To learn more about HPV-related cancers, or any cancers involving the head and neck, HNCA http://www.headandneck.org is a wonderful resource. This organization is also the only group in the United States that gives cancer patients a $50 gas card to get to and from their treatment appointments-like Mendelsohn, very personal and caring.

In addition to serving on HNCA's board, Mendelsohn also serves on the board of the Florida Hospital Cancer Institute as a patient advocate.

While Mendelsohn was undergoing treatment, he recorded a video for his family-he and Ronni have been married 21 years and they have three "awesome" children. It was an "after death" video. His goal is that he can stop another father from ever having to make a video to their children like that.

*When Jason and I met for this second interview, he jokingly referred to me as his "Lois Lane" because it was the Heritage that first helped bring attention to HPV-related oral cancer.