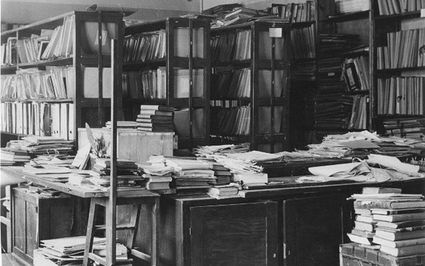 The YIVO Institute for Jewish Research in New York on Wednesday announced the discovery of a trove of lost Jewish materials in the Lithuanian city of Vilna, thought to have been destroyed during the Holocaust.

Considered by some as the most important body of material in Jewish history and culture to be unearthed in more than half a century, possibly since the discovery of the Dead Sea Scrolls, the documents include never-before-published literary manuscripts from some of the most famous Yiddish writers as well as numerous religious and communal works.

YIVO states that this is "a watershed moment for understanding the dimensions of Jewish history" and marks an "important new chapter in the dramatic story of Nazi looting during the Holocaust, when the Germans were seeking to destroy not just the Jewish people, but their memory and culture."

In Lithuania, approximately 90-95 percent of the Jewish population was murdered by the Nazis.

Containing more than 170,000 pages, this trove of material was first hidden from the Nazis by the YIVO Paper Brigade during WWII and subsequently preserved for decades by the heroic efforts of Antanas Ulpis, a Lithuanian librarian, who saved the documents from the pulping mills and stored them in secret in the basement of St. George Church, where he worked.

The Paper Brigade of Vilna, formed during WWII, was a small group of Jewish intellectuals who took it upon themselves to save as many documents as possible from Nazi destruction, in an effort to preserve the memory of Jewish culture.

Ulpis risked his own life and his family's well-being to keep these documents hidden and preserve the memory of the Jewish people.

The new discovery is of particular note for its wealth of manuscripts-precious religious writings, in Hebrew and Yiddish; record books of shuls and yeshivas; mystical writings, and more. Additionally, the collection contains post-war and wartime materials, such as Yiddish poetry written in the Vilna Ghetto by the famed Abraham Sutzkever.

The newly discovered documents more than double previous finds from the basement of St. George Church, which included books and documents found in the late 1980s and early 1990s. The materials were held in a separate room in the church and remained undocumented until now. When combined with the existing Edward Blank YIVO Vilna Collections, which contain one million documents, YIVO will now have saved approximately 1.2 million original documents from the Jewish world of Eastern Europe.

'Testament to Enduring Resolve of the Jewish People'

The discovery "reminds us of the perpetual attempt at wiping out a people by erasing their memory from history," said Jonathan Brent, Executive Director and CEO of YIVO. "These newly discovered documents will allow that memory of Eastern European Jews to live on, while enabling us to have a true accounting of the past that breaks through stereotypes and clichéd ways of thinking."

"This newly discovered collection... is a testament to the enduring resolve of the Jewish people. Displaying this collection will teach our children what happened to the Jews of the Holocaust so that we are never witnesses to such darkness in the world again," said Senator Charles Schumer.

"To us, the documents uncovered in this discovery are nothing less than priceless family heirlooms, concealed like precious gems from Nazi storm troopers and Soviet grave robbers. We have a responsibility to absorb the traditions, experiences and culture within these manuscripts, poems and letters, and to remember how much more has been lost," said Dani Dayan, Consul General of Israel in New York.