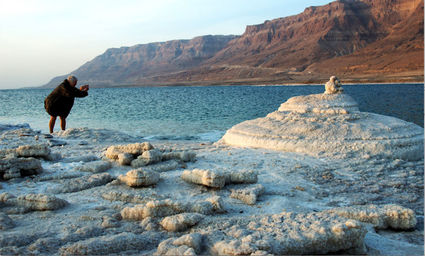 A photograph by Noam Bedein of salt pillars that are now above water at the Dead Sea.

The great wonder known as the Dead Sea is shrinking at an alarming rate. This calamity has brought Dead Sea explorer and researcher Noam Bedein to lecture halls across the U.S. with the hope of bringing awareness on what changes we may be witnessing in the coming years. On Oct. 23, Bedein spoke to the students at the University of Central Florida. The event was sponsored by the student organization Knights for Israel and CAMERA on Campus. Bedein's stunning photography and virtual reality displays showed clearly what his thought-provoking presentation argued; water levels in the Dead Sea have reached historic lows.

Beginning in 2016, Bedein sought to capture the alluring scenery deep within the Dead Sea, in places one can only reach by boat. On his voyage, he was in awe as he found salt caves, chimneys, and pillars that were mostly underwater. It wasn't until his second trip five months later, when he realized the majority of those same salty structures appeared to be out of the water and more visible. While climate change has helped Bedein capture the hidden beauty beneath the Dead Sea, it comes at a great cost. With the structures out of water, they fall victim to intense dry heat, and over time, can breakdown and crumble. In his presentation, Bedein stated that scientists estimate that the sea level drops one and a half meters a year, and by 2050, the Dead Sea will be nothing more than a puddle.

At UCF, Bedein filled a lecture room with a captivating photo exhibit of his findings in the northern portion of the Dead Sea. He explained to us how climate change has left a large ecological footprint, not only on the Dead Sea, but on the Jordan River as well. A huge source of the Dead Sea's water supply comes from the Jordan River, whose depth has also been reduced significantly. As a result, what's left of the Jordan River can no longer sustainably replenish the Dead Sea. Today, Israel and her neighbors in the Palestinian Authority Territories, Syria, Jordan, and even Saudi Arabia, are looking to find viable solutions that would save the lowest point on Earth from reaching even lower depths. 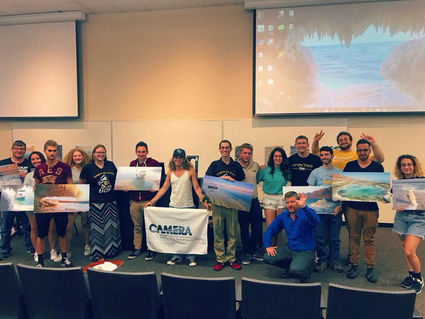 UCF students holding some of Noam Bedein's photographs. Bedein is kneeling in front in the blue shirt.

To help make light of a dark situation, Bedein brought out his virtual reality demonstration, made with the help of CNN VR Productions. Twice a month, Bedein takes tourists and Israeli citizens with him on his expedition but since he couldn't bring his audience to the Dead Sea, Bedein brought the Dead Sea to his audience. One by one, students impatiently waited to try on the VR headset and see what it's like to explore the Dead Sea. It was an experience that had us craving the real thing, and I don't doubt that many of these students will visit the sea on their next trip to the Holy Land.

After speaking with students across the country, Bedein believes that there is an environmental activist in all of us. By continuing to reach out to colleges as he did for the students of UCF, Bedein hopes to evoke an appreciation for the Dead Sea's beauty and inspire his audience to do what they can in order to keep the Dead Sea afloat.

Jake Suster is a CAMERA Fellow as well as a finance major in his third year at the University of Central Florida.