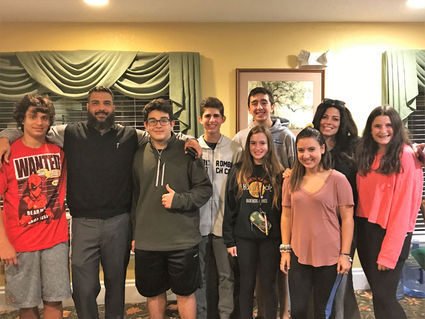 Rabbi Ed (second from left) and Bracha Leibowitz (second to last) of Chabad of Greater Orlando with CTeen youth.

Do you remember when the original trolleys ran in New York state? On Thursday, Oct. 23, 90-year-old Carl from Brookdale Island Lake reflected back on when the trolley ran through the city of Buffalo, sharing his memories with his new teenager friend, Matthew. Residents, Cyndee and Al, joined the trip down memory lane, recalling a time when the milkman and the doctor came right to their door. Teens from three local Chabad centers (Chabad of North Orlando, Chabad of South Orlando, and Chabad of Greater Orlando) spent time with residents of Brookdale Island Lake senior living community, and got to know them better with a fun and informative question and answer session. CTeen youth helpers, 18-year-olds Mimi Muniz and Reba Waggoner, shared that it was interesting to see the resident's take on life, and learn about history, as well as experiences that they didn't get to see (but would have enjoyed).

Rabbi Yanky Majesky of Chabad of North Orlando led the roomful of teens and older adults through lively renditions of familiar Jewish songs like Hava Nagila, accompanied by Walter Goldstein, Jewish Pavilion Intergenerational Program director. Goldstein commented, "Though this 7 p.m. program was later than most, the room reverberated with energy from singing, clapping, and story-telling amongst the generations. Thank you to Rabbi Yanky Majesky of CTeen North Orlando, Rabbi Ed and Bracha Leibowitz of CTeen Greater Orlando, and Shaina Zibell of CTeen South Orlando for bringing an engaging program that was interactive and enjoyable for participants of all ages." Goldstein added, "Real connections were made, and age differences fell away, as youth and seniors carried on back and forth conversations."

The Jewish Pavilion Intergenerational Programs are sponsored in part by the Jewish Federation of Greater Orlando and the Irving Moskowitz Foundation.