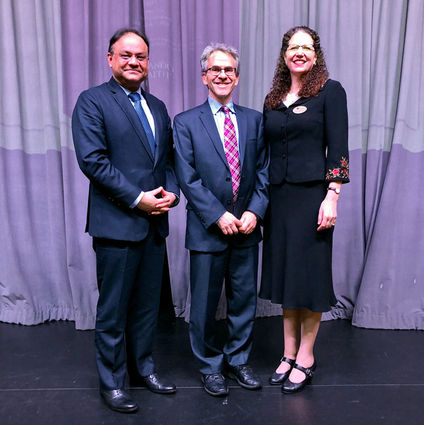 When India's Prime Minister Narendra Modi visited Israel last July and waded in the ocean with Prime Minister Benjamin Netanyahu, that historic meeting not only paved the way for a stronger relationship between the countries, it spurred local doctors, Jewish and Indian, to have an informative, networking event together.

Drs. Amish Parikh and Daniel Layish, friends who are members of the Central Florida Association of Physicians from the Indian Subcontinent and the Jewish Federation of Greater Orlando Maimonides Medical Society respectively, agreed that now was the time to bring community awareness to the growing relationship between Israel and India, and build bridges for a sustainable relationship between the two countries.

And why not? Both countries gained their independence from British rule a mere year apart-India in 1947 and Israel in 1948. Both are democracies in a sea of Arab-ruled countries, and were partitioned into two-states-India with Pakistan; Israel with the Palestinians-and these issues are still not fully resolved for both countries.

But the relationship goes deeper than historical similarities.

So Layish and Parikh worked to bring together the two groups, with the organizational talents of Dr. Jamin Brahmbhatt, who served as lead co-ordinator of the event.

"I wanted to see people come together who usually don't, but have a common mission to do good," said Brahmbhatt.

Dr. Archana Shah had the same feelings. "Modi's visit made a big impact, and we physicians work closely with the Jewish physicians. Thus networking brings us closer together."

Shah also said that there is already discussion of planning tours to each other's countries.

After an Indian meal, the group of about 60 people listened intently about India. It was noted that the ratio was unbalanced with more Indians than Jews at the meeting. Brahmbhatt easily rationalized it. "There are 1.3 billion Indians and only 8 million Israelis!"

Still, the listeners learned common interests of both countries.

Today, the two countries have a thriving economic, military and strategic relationship.

"This was eye-opening!" said Rabbi Michoel Rennert. "It took them (India) a long time to get comfortable and stand up for Israel, but they're getting there. The consul was excited and unreserved about Israel. These two democracies are fighting for similar values-to have that standard to have a free society."

It did take India a long time to start supporting Israel, and the issue was addressed at the meeting. In 1947, India voted against the partitioning of Palestine and also voted against Israel's admission to the United Nations in 1949. India officially recognized the State of Israel in 1950. At that time, Prime Minister Jawaharlal Nehru explained, "We refrained because of our desire not to offend the sentiments of our friends in the Arab countries."

Because of the lack of anti-Semitism, India is the No.1 place where IDF soldiers go to take their six-months vacation.

However, until recently, India was not voting in the UN like a friend of Israel. That is changing, according to Singh.

"One thing that struck me was that India was aligned with the USSR during the '70s and '80s whereas Israel was on our side during the Cold War," said David Moldau who attended the meeting with his wife, Harriet. "With the downfall of the USSR, the old alliances disintegrated and now the two countries are exchanging ideas and are trading partners."

"India moved closer to Israel when Israel clandestinely sold weapons to India back in the '50s," said Rennert.

The weapons deals are no longer done in secret. Today, India is the largest buyer of Israeli military equipment, and Israel is the second largest defense supplier to India (after Russia).

Another problem Israel is helping India solve is water management. Israel introduced the water-drip irrigation system to India and now has 18-20 different agricultural centers, according to Singh. Water usage went down about 50 percent and productivity went up.

"Water management and conservation is something India needs because of their huge population and Israel has the best expertise in the world," stated Moldau.

Colman sees all that is happening between the two countries as a double blessing. He sees no challenges, only more cooperation.

On a poignant note, the group discussed the terrorist attack on the Chabad House in Mumbai in November 2008. Terrorists brutally massacred Rabbi Gabriel Holtzberg, his 5-months pregnant wife, Rivka, and two young sons. Their two-year-old son Moshe survived the attack after being rescued by his Indian nanny, Sandra Samuel.

Rabbi Yosef Konikov of South Orlando Chabad spoke about this at the meeting. He and his wife Chani have six children. They named their youngest son Gabriel (Gabby) in memory of the rabbi.

Moshe and his nanny moved to Israel. During his visit, Modi met and embraced the now 11-year-old Moshe. Netanyahu then invited the young boy to go with him when he visits Mumbai. Young Moshe, whose family was murdered in India, only had kind words to say to Modi. "Dear Mr. Modi, I love you," he stated, "and your people in India." He later expressed that he would like to be the rabbi of a Chabad House in India one day. Watch the YouTube video here https://www.youtube.com/watch?v=Ge9l-Ue4CIA.

Konikov expressed the general consensus of everyone who attended the meeting, that Modi's trip to Israel has taken things in a positive direction.

"We still have differences, but we are looking past these to see commonalities. [The two countries] have a higher purpose-both countries are working for common goals." 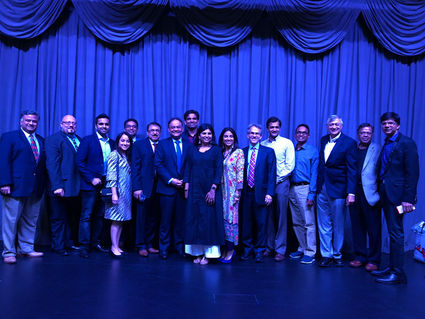 Parikh was pleased with the meeting. "It was more than fulfilling and accomplished what I hoped for. This will lead to a relationship that will extend beyond my time," he said. "The feedback has been excellent and we hope to have follow-up events."