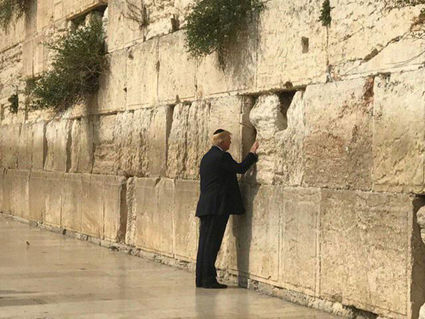 President Donald Trump at the Kotel in Jerusalem.

As the Heritage Florida Jewish News went to press, the world was anticipating the announcement from President Donald Trump to declare Jerusalem as Israel's capital and beginning the process of moving the U.S. Embassy to the holy city, a step that threatens to spark unrest across the Middle East and undermine American efforts to forge a new peace plan.

The State Department, meanwhile, warned U.S. embassies around the world to prepare for possible protests and violence and banned travel by government employees and their families to Jerusalem's Old City and Judea and Samaria.

The U.S. will delay the actual embassy relocation for now to address logistical and security challenges, officials said, but U.S. recognition of Jerusalem as Israel's capital also will come as a potent diplomatic step with implications for regional peace.

Trump passed a deadline Monday for his decision on moving the U.S. embassy. A 1995 U.S. law requires the U.S. Embassy in Israel to be located in Jerusalem, but allows for a presidential waiver, something each U.S. leader has signed. Trump signed a relocation waiver in June, but became frustrated during a National Security Council meeting last week in which another waiver deadline was discussed, U.S. officials said.

Trump promised to move the embassy as part of his presidential campaign. By declaring Jerusalem the capital of Israel now, Trump can delay the formal embassy relocation while still fulfilling part of his campaign pledge.