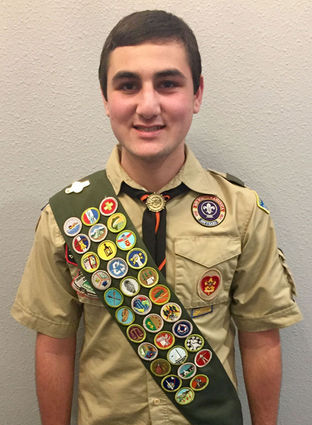 A Boy Scout doesn't just become an Eagle Scout. He has to earn the rank through a series of requirements, including: earn 21 merit badges-13 of which are required; perform a service project that he plans, develops and oversees; and successfully complete an Eagle Scout board of review. Fewer than 5 percent of Boy Scouts earn the Eagle rank.

Tyler Gaeser, the son of Marci and Jeff Gaeser, has been in scouting since first grade when he became a Cub Scout. He advanced to Boy Scout Troop 617, Oviedo in fifth grade. Now a senior in high school, he has accomplished these requirements and more. On Nov. 19, 2017, after an Eagle Scout board of review, Gaeser received the rank of Eagle Scout. 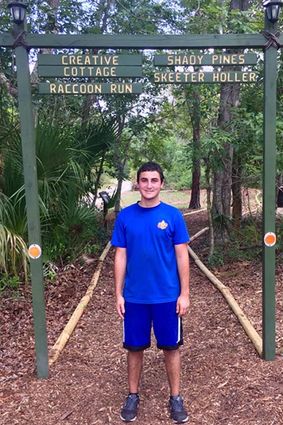 Gaeser standing at the entrance to the trail at Mah-Kah-Wee Girl Scout Camp that he restored.

Gaeser didn't just earn 21 badges, he earned 32. The service project he planned and executed was to renovate the Mah-Kah-Wee Girl Scout Camp trail in Chuluota. After approval from the camp leaders, Gaeser enlisted 21 people to help clean up the trail by widening the path by 2 feet, replacing landscape timbers, reinforcing the sides of the trail using rebar hammered into the timber, relocating reflectors on the path, and mulching the trail.

Gaeser explained that he could have done this project by himself, but the purpose of the service project was to demonstrate the ability to lead. He had the vision for the project, explained that vision to his crew of 14 troop members and six adults, and oversaw the execution of the project.

Now 18, Gaeser has completed the Boy Scouts. However, the red, white and blue Eagle Scout badge he was awarded is a challenge to live up to for the rest of his life: white represents honor, blue inspires loyalty; red is courage; the "Be Prepared" insignia is a reminder of service; and the eagle stands as protector of the weak and helpless.