VP Pence: Trump considering 'when and how' to move embassy to Jerusalem 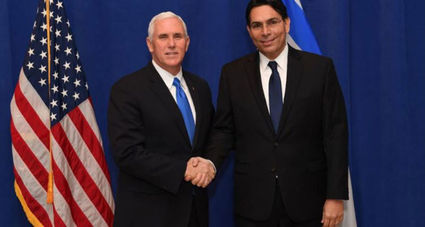 With files from the Israel Mission to the UN

Israel's Mission to the United Nations, in partnership with the World Jewish Congress, celebrated 70 years since the historic November 29, 1947 United Nations vote on Resolution 181 that called for the establishment of a Jewish State in the Land of Israel. The event, initiated by Israel's Ambassador to the UN Danny Danon, took place in the Queens Museum, which served as UN headquarters in 1947 when the vote took place.

US Vice President Mike Pence served as the guest of honor and keynote speaker at the celebration, which was attended by US Secretary of Treasury Steven Mnuchin, over 60 UN ambassadors, senior diplomats and Jewish community leaders from around the world. World Jewish Congress President Ambassador Ronald Lauder and Israel Katz, Israel's transportation and intelligence minister, addressed the gathering as well.

"From this day onward," he concluded, "for the next 70 years and beyond, Israel will continue to be a beacon of democracy, a powerhouse of innovation and a light unto the nations."

Speaking of the special bond between the US and Israel, Pence said: "As we speak, President Trump is actively considering when and how to move the American Embassy in Israel from Tel Aviv to Jerusalem. And President Trump is also committed to finally bring peace to the Israeli-Palestinian conflict. As President Trump has said, "we want Israel to have peace," and in recent months, we have made valuable progress toward that noble goal. And while compromise will be necessary, you can rest assured-President Trump will never compromise the safety and security of the Jewish state of Israel. President Trump has made clear that under this administration, America once again stands with our allies and stands up to our enemies."