Connecting through the gift of generousity 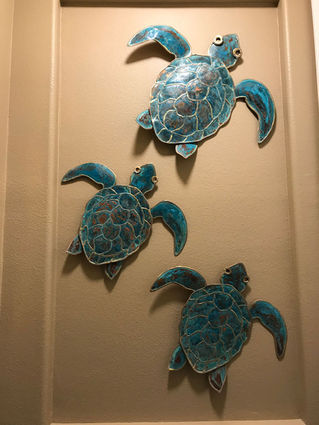 The family of turtles in the Shapiro's shadow box.

Larry and I have many "pets" in our home. A butterfly rests outside our front door, and two larger ones fly on our lanai wall. A two-foot bear clutching his "Bear Feet Only" sign greets visitors on the front porch. Pedro the Parrot hangs on a curtain rod. And various bulldogs-stuffed, ceramic, and metal, are stationed around the house in honor of the nickname my boss gave me when I moved from the classroom to an administrative office.

However, I would have to say my favorite animals in our menagerie are three turtles and a pelican. These metal copper sculptures are the creative work of a talented Albuquerque, New Mexico, artist who made last year's Chanukah very special.

In July 2015, Larry and I were spending the summer in Frisco, Colorado, with our daughter Julie, her husband Sam, and their newborn daughter, Sylvie Rose. We had arrived in the Rocky Mountains less than a month after we had moved into our new home in Florida. We had brought several pieces of art for our walls, but many other spaces were empty by choice. We knew that much of the art work that was on the walls from our Upstate New York home-reflective of the Adirondack Mountains fall scenes, Early American accents-would not work in Florida.

One area that was tricky for us to decorate was a shadow box effect in the living room. We needed to find something to fill a recessed space in a hallway that would reflect our now Southern address. In August, we were at an art show in downtown Frisco when we noticed some colorful, unique pieces in copper. Many of the objects were reflective of the Southwest: lizards, snakes, kokopellli. We introduced ourselves to Greg Gowen, the artist manning the outdoor booth.

Greg, a native of Texas, was born in 1968 and began welding at age eight under the guidance of his father and mother, Mike and Martha Gowen, both well known artists and gallery owners.

"My daddy showed me how to sculpt," he wrote on his webpage, "and my mother taught me to make it beautiful." At the age of 18 Greg turned to the art world for his career. He began participating in art shows around the Southwest. Galleries quickly became aware of his talent and began exhibiting and selling his work. Today, Greg's sculptures are displayed in private collections, galleries, and museums throughout the United States and abroad. We were lucky to happen upon his beautiful copper sculptures. We were especially attracted to his turtle design.

After we emailed the dimensions of the shadowbox when we returned home, Greg suggested we purchase three turtles, a "mother" and two "babies," to fill the space.

The family of turtles arrived as ordered within the next few weeks. The colors, the size, the way they fit into the space were perfect. We named them Mother Turtle Tessie and her two children Tommy and Tillie, and posted a picture on Facebook announcing their arrival. The three turtles were a conversation piece when we showed people our new home.

It was time to fill more walls. We found a photo of a beach scene mounted on wood that fit over our couch. We added a palm tree clock to the laundry room and a fish clock onto the lanai. In Key West, we found two signs for our guest bedroom: One read, "Honestly now. What's Your Hurry? You're here!" The second was a colorful road sign showing the mileage to Boston, New York City, and San Francisco.

What was missing was a piece for our guest bathroom. I was the butterfly lover and bulldog-moniker nickname bearer of the family, but Larry loved pelicans. I knew from his website that Greg had not done pelicans before. In May 2016, I contacted Greg via email to see if he could work his magic in creating a version of Larry's favorite bird to hang over the toilet. Greg responded a couple of days later with his answer. Yes, he would love to create the figure. As I had already missed the deadline for Larry's May birthday, he promised to have completed by Chanukah.

Greg and I were in touch over the summer. In late October, however, I realized I hadn't heard from him, nor had any pelicans flown our way via UPS. When he failed to respond to an email, I sent him one more. If he couldn't get it to us in time for Chanukah, I understood. I'd give it to Larry for his May birthday.

On Dec. 24, Greg emailed me his apologies. He wanted to surprise Larry and me with the pelican in time for Christmas but mailed it to the wrong address. He felt terrible as it won't be under our Christmas tree.

I wrote him back immediately with the good news that we were Jewish. Dec. 24 was not only Christmas Eve, but also the first night of Chanukah. Getting it on the third or fourth day of our holiday would be fine.

True to his word, the pelican arrived on the following Tuesday. "Peter the Pelican fits perfectly in our bathroom," I wrote. "Larry and I are very happy with the newest member of our menagerie. How much do I owe you?"

"Nothing," Greg wrote back. "I was late in getting it to you. It is my gift for the aggravation I caused."

Larry and I were grateful for Greg's generous offer, but we couldn't accept. I wrote him a note thanking him but telling him we were very aware of the time he had taken to design and craft our pelican and ship Peter to his new home. I enclosed a check for $180. "The number 18 has special significance in Judaism," I told Greg. "It signifies life. Use the money to do something special for you or your grandchildren." 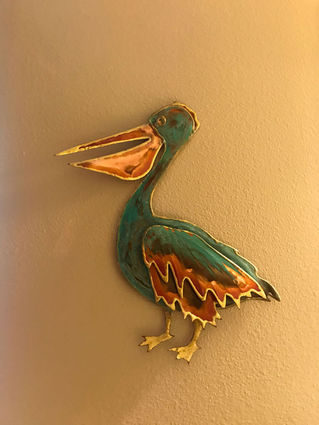 Peter the Pelican who graces the Shapiro's bathroom.

A couple of months later, Greg emailed me to tell me that he had used our money to treat himself, his wife Debbie, and Martha and Del Pettigrew, two fellow artists, to dinner at a lovely restaurant in Scottsdale, Arizona. The four of them raised their wine glasses in a toast to the Shapiro's. "I love creating metal works for patrons like you!" wrote Greg in his thank you. "May God richly bless you."

I was happy to learn that our gift to him had created wonderful memories with his friends-memories that were more poignant when Del passed away a few months later. That special dinner was the last time they saw their dear friend.

"What a profound effect your generosity has had," Greg wrote recently. "I will never forget!"

Greg continues to sculpt, drawing inspiration from all over. He carries around a sketchpad in case something sparks an idea. "My favorite part of my art is when I see a customer connect with a piece," he wrote on another art gallery website. And through his turtles, his pelican, and mutual generosity, we have connected with Greg.