Jewish world celebrates US recognition of Jerusalem as Israel's capital 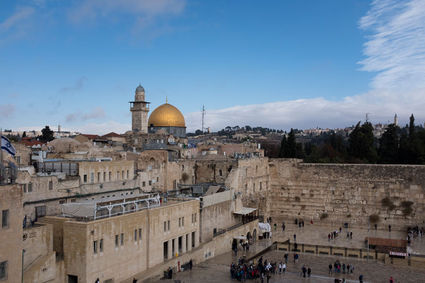 A view of the Western Wall and the golden Dome of the Rock Islamic shrine in Jerusalem, Dec. 6, 2017.

Israel's leadership and Jews from around the world celebrated President Donald Trump's statement that the US officially recognizes Jerusalem as Israel's capital, and that plans to move the US embassy from Tel Aviv to Jerusalem are in motion.

The US "finally acknowledge[s] the obvious: that Jerusalem is Israel's capital. This is nothing more, or less, than a recognition of reality. It is also the right thing to do. It's something that has to be done," Trump stated at the White House on Wednesday.

Israel is "profoundly grateful for the President, for his courageous and just decision to recognize Jerusalem as the capital of Israel and to prepare for the opening of the US embassy here. This decision reflects the President's commitment to an ancient but enduring truth, to fulfilling his promises and to advancing peace," Netanyahu said.

Netanyahu also underscored that Trump's decision is "an important step towards peace, for there is no peace that doesn't include Jerusalem as the capital of the State of Israel."

Netanyahu reiterated Israel's commitment to advancing peace and to maintaining the status quo at the holy sites.

"I call on all countries that seek peace to join the United States in recognizing Jerusalem as Israel's capital and to move their embassies here," Netanyahu stated.

President Reuven Rivlin stated that "there is no more fitting or beautiful gift, as we approach 70 years of the State of Israel's independence."

After the 50th anniversary of the reunification of the city "the time has come to bring tranquility to Jerusalem, and to see hope blossom in the capital of Israel, the place where pilgrims come from around the world," Rivlin stated.

"The recognition of Jerusalem as the capital of Israel, and the relocation of all embassies to the city, is a landmark in the recognition of the right of the Jewish people to our land, and a milestone on our road to peace-peace for all the residents of Jerusalem, and the whole region," he said

Israel's Ambassador to the United Nations (UN) Danny Danon welcomed Trump's announcement, calling it "courageous" and similar to the one made by President Harry Truman in 1948 when he became the first world leader to recognize the State of Israel

He called on all UN member-states "to follow the lead of our American friends and recognize our ancient capital of Jerusalem as the capital of the State of Israel."

Just hours after President Trump's speech, the Czech Republic issued a statement saying it recognizes the pre-1967 west Jerusalem as the capital of Israel, but that it will only consider moving its embassy from Tel Aviv to the city after talks with regional partners.

"Jerusalem is the indisputable capital of Israel and the historic capital of the Jewish people. We hope that the US' clear declaration to this effect, and its reiteration that this has long been its policy, sends a strong message to the international community of this truth," Lauder stated.

In honor of the event, the flags of Israel and the US were projected on the walls of Jerusalem's Old City.