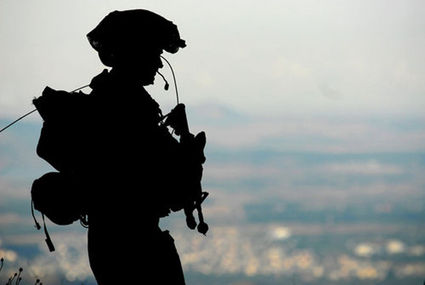 An IDF soldier standing guard at a military base in Israel's northern Golan Heights region.

(JNS.org) A war along Israel's northern border could be just "weeks" away, according to Israeli Ambassador to the U.S. Ron Dermer.

Dermer made the comments in a wide-ranging interview published by Politico on Monday, stating that the probability of direct conflict with the Iranian terror proxy Hezbollah is "higher than people think because of Iran's continued push through the region."

"If Iran is not rolled back in Syria, then the chances of military confrontation are growing. I don't want to tell you by the year or by the month. I'd say even by the week," Dermer said.

The ambassador explained that as Iran continues to aggressively expand its military presence near Israel's border, the Jewish state is forced to enforce its "red lines," which risks an escalation in tension.

"The more they push, we have to enforce our red lines, and you always have the prospects of an escalation, even when parties don't want an escalation, because we will not allow Iran to establish that presence and establish another terror front against Israel in Syria," said Dermer.

"So in taking action to defend ourselves, you don't know what could happen," he said.

In line with Dermer's comments, the Israeli Air Force allegedly conducted an airstrike Monday night on a "military scientific research center" on the outskirts of Damascus.

The purported strike followed an alleged Israeli airstrike last Friday on an Iranian military base in Syria.