Fake news then and now 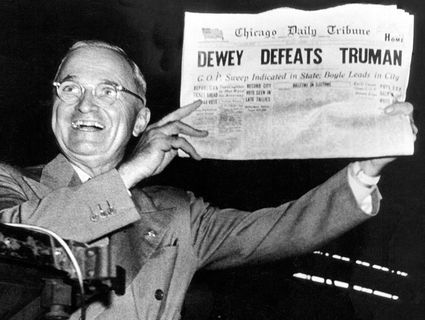 President-elect Harry S. Truman holds up copy of the Chicago Daily Tribune with a headline that jumped the gun.

More than a generation ago, the passion to be the first to report the news led to the Chicago Tribune's banner headline of Nov. 3, 1948:

"DEWEY DEFEATS TRUMAN!" President Truman delighted in posing with the paper and beaming a smile from ear to ear. The Tribune had accepted as gospel the previous Newsweek's monthly cover story of an imminent Republican landslide: "Fifty Political Experts Unanimously Predict a Dewey Victory" (Oct. 11, 1948).

Even worse in the history of American journalism was coverage of the "Sinking of the Maine," revealed as false news by an official U.S. Navy report. Two official U.S. government investigations in 1898 and 1911 confirmed the view that the ship had been destroyed by a mine. In 1974, Admiral Hyman G. Rickover asked naval historians to undertake a reexamination of the sinking of the Maine to determine whether the cause of the explosion was a mine or an internal explosion. Professional engineers interpreted photographs of the wreck to study the ship's structure. Their conclusion was that the explosion was, "without a doubt, internal," thus contradicting the earlier studies, through the use of a much more sophisticated technology.

Similar catastrophically mistaken predictions, polls and analyses only belabor the point; the 1936 poll predicting an Alf Landon victory (based on telephone calls from randomly selected telephone books at a time when the only home telephones were all landlines) for the Republicans over a second term reelection for FDR; the election call in favor of Democratic candidate Al Gore in 2000 before the polls had closed in Florida's Panhandle; the presentation by the BBC, CNN and others, of Iraqi spokesman "Baghdad Bob" without any editorial comment when the information he presented clearly violated the elementary facts on the ground of the deep advances made by American forces into Baghdad; the film footage presented as evidence by Reuters, AP and the French television network France 2 that was pasted together to make it look like a 12-year-old boy, Mohammed Al-Durah, had been killed by Israeli fire on Sept. 30, 2000.

The television news media are with heir penchant for entertainment, highlighting blood and mayhem infinitely worse than the printed press was in the newspaper age. The time deadline is the most compressed to "get out a story."

What seems to fascinate the cameramen and the demands of their producers for a newsworthy event involves a trait common to primitive societies everywhere-a belief in what anthropologists call "sympathetic magic" that "like produces like" so that trampling upon or burning a flag (most preferably, American, British, or Israeli) or ripping apart in effigy a dummy or doll made to portray Uncle Sam, or a similar representation of a Western country, or trashing a fast food western chain restaurant like McDonalds, will somehow, through the magic of the media's "voodoo," result in real life damage against the actual country, business firm or national leader. The reporters thus have no difficulty in explaining that the mob is "venting its anger" on its evil enemies and that their grievances are therefore somehow newsworthy and "authentic." Since Dec. 7, newspaper reporters and cameramen have been disappointed by the relative mild nature of anti-Israeli demonstrations in the West Bank and East Jerusalem. Even more counter-intuitive has been the rise in applications among Palestinians in East Jerusalem to acquire Israeli citizenship during this same time period.

It is often a small step for the sponsors of such events to incite the mob to try to transfer their anger to the real flesh and blood objects of their hatred and frenzy instead of rags and dolls. We thus have the most sophisticated mass communication technologies of the 21st century catering to primitive mob behavior. Ideally, a responsible press, which has enough time to determine whether a "demonstration" was simply made solely for the benefit of the media or was a spontaneous manifestation of crowd behavior, should make this distinction clear.

It is clear from the many made-for-TV film presentations of the news where Muslims, who are illiterate in their own languages, are carrying signs with slogans in English. Interviews with the "man in the street" are hardly reliable. In many third world countries, they are either unwilling or unable to act reliably for fear of retribution. Often, the camera crews are wholly ignorant of the local languages and unaccompanied by interpreters. Unlike the previous generations of newspaper readers, reporters do not dispose of the same leisure time to carefully wade through and weigh the facts and follow-up reporting that may take days or even weeks to clarify.

Another area of visual media distortion that was not so acute when the media was largely limited to the power of the written is now practiced universally on television by editing out interpreters-almost always an "invisible" person. The interpreter, frequently used in television interviews, is cut out by manipulating camera angles so as to convey to the audience that heads of state or "the man in the street" are actually conversing with each other or the reporter.

In my one experience with the BBC at their studios while I lived in London (1993), I was called on to provide a 2-minute simultaneous translation into English of remarks made by then Prime Minister Yitzhak Rabin. The final segment telecast that evening reduced the coverage to 19 seconds. While the prime minister was seen on television and his muted voice could be heard in Hebrew, my voice was heard in English by viewers. I had to do four "takes" because the producer was not satisfied that my voice was significantly "cruel enough" when I used the term "harsh punishment," which Rabin promised would be meted out to demonstrators committing violence against Israeli civilians or soldiers.

Today, the old adage that "one picture is worth 10,000 words" is simply wrong. It may well be that a few words are worth much more than a misleading or fabricated picture created by digital photography or it may be that we really need 10,000 words to understand what we see and be aware of what we do not see or has been hidden from the camera.

With today's computer-generated images, pictures can be made to show anything the designer wants and make it look believable. A free press should make it a sacred duty not simply to "cover" what is most visibly apparent to the eye but to penetrate areas where cameras are usually forbidden so as to provide analysis of the backgrounds and people behind events.

Yet when Donald Trump first used the expression "Fake News," he was pilloried by the media who ridiculed his assertions about Trump Tower being bugged as "the height of irresponsibility." We know now that this was almost certainly the case under the provisions of the Foreign Intelligence Surveillance Act of 1978 (FISA) to oversee requests for surveillance warrants against foreign spies inside the United States by federal law enforcement and intelligence agencies. The warrant was most likely procured under an invented dossier and false pretenses by FBI operators with a severe anti-Trump bias, thus further discrediting Special Prosecutor Robert Mueller.

Both the press and televised news have been guilty of many sins. In spite of all the great advances in the technology of communications, what unites them over more than a hundred years has been the "rush to judgment" in order to out-scoop rivals. Newspaper journalists could always excuse the need to meet deadlines with the explanation that it was not possible to wait and find confirmation in the field because they lacked the technical "eyes and ears" of information gathering that would allow them to check the validity of their sources. They knew however that the readers would expect follow-up reporting to verify and interpret events with careful research and analysis.

There is usually no curiosity or search for relevant precedents to events. The recent near-universal criticism of President Trump's remarks stated intention to recognize Jerusalem as Israel's capital usually omitted any reference to the following:

As clarified by noted attorney Alan Dershowitz (see Algemeiner, Dec. 23, 2017), it was lame duck President Obama, in a spiteful act of revenge against Prime Minister Netanyahu, who gave approval of the American abstention vote in the U.N. Security Council (much more important than a resolution by the general Assembly) in December 2016 criticizing Israel alone for "illegal occupation." This step removed the fig leaf cover that, until a final agreement to be negotiated by the parties was reached, no alteration in the final political status of the territories of the cities of Jerusalem and Bethlehem and their surrounding of the 1947 Partition Plan designated as an "international zone," would be as legal. The December 2016 U.N. resolution violated that provision by declaring Israel as an "illegal occupier." In this regard, Jordan was just as much an illegal occupier of the parts of the international zone it had seized and occupied from 1948 to 1967 including sites universally recognized as Jewish including the entirety of the old Jewish Quarter (the most populous residential area of the city in which Jews formed the largest group since 1850), Mt. Scopus, site of the original Hebrew University whose foundation stone had been laid by Albert Einstein, Hadassah hospital, and the "Western Wall" remnant of the last Jewish temple destroyed by the Romans. All of these areas were acknowledged even by Palestinian Arab negotiators as certain to become part of Israel in a final agreement).

Proclamation of the Russian Foreign Ministry in April of this year (six months before Trump's announcement), that it recognizes West Jerusalem as Israel's eventual capital and, that at the time of a final settlement, it intends to recognize East Jerusalem as the capital of an Arab entity.

Declaration by both Houses of Congress that Jerusalem is the capital of Israel in 1995 and that the embassy should be moved there.

The moral weight of the many East European nations including Poland, Romania, Hungary, Bosnia-Hercegovina and Latvia that abstained from voting as did the Czech Republic whose parliament voted to recognize Jerusalem as Israel's capital and requested the government to take steps to do so. The Czechs, more than anyone else know of the failure and worthless promises of the "great powers" and international organizations to guarantee their sovereignty in the face of threats. It also demonstrated the moral bankruptcy and disunity of the European Union whose appeasement policies and pressure on Eastern Europe to accept Muslim refugees, these countries reject.

Unfortunately, much of the press, which should be more patient and get the news right before commenting, does not see a special responsibility to be a counterweight to the visual media. It is not interested in reviewing any qualifying relevant information to its conclusions. The role of the press has traditionally been to bring a more balanced interpretation and explanation of the significance of the "news" and put it in perspective, but all too often, it tries to compete with television and compounds the distorted image we frequently get. The worst examples of this involve both the "rush to judgment" and the self-flagellating, masochistic penchant of many reporters and news teams to "sell" a story that uses dramatic visual images in which the "man bites dog" element can be exploited. Fake and sensationalist news will always have a huge audience.