Don't miss the Central Florida premier of 'The Bigot' 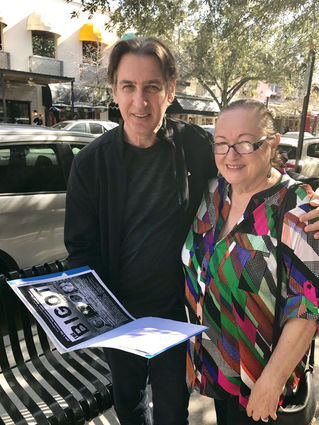 "How can you hate someone you have never even met?" was a question frequently pondered by 6-year-old Eva Mor, as a young child growing up in Poland in the year's following World War II. Often harassed and bullied on the way to and from kindergarten, or even from a short walk to the park, the child of two Holocaust and labor camp survivors was perplexed by the hate and bigotry directed at the Jewish members of her community well after the war's end. In 1957, the family sought refuge in Israel, but the disturbing memories from her early childhood often came to mind.

More than 50 years later, Eva, now a playwright alongside husband, Gabi, found herself haunted by the uptick of hate taking place in modern America, and throughout the world. Together, the couple brainstormed ideas for a play that addressed hate that comes from a place of cultural ignorance, much like from her own childhood. The idea for the play "The Bigot" was hatched in late 2016, just as local news became filled with stories of injustice and intolerance.

With the hopes of triggering a global conversation, the Manhattan- and Orlando-based couple created "The Bigot," fleshed out in the form of a race-baiting character named Jim. Answering the opening sentence to this article, Jim hates just about anybody he hasn't met, especially those who are ethnically and socially 'diverse,' and look or act differently than himself. "The Bigot's" lesbian neighbors experience his wrath, and he is open about his racist tirades, with his son, (much to his dismay) a social liberal.

When asked what makes Jim different than "All in the Family's" Archie Bunker, Gabi notes that while there are some similarities, "Archie has more of a gut reaction to his surroundings, Jim attempts to defend his responses with a twisted logic that he wants to see as the truth." Gabi shares that one reviewer called Jim, 'Archie Bunker 2.0.'

"Jim feels threatened by an era of change that is not part of who he is," Gabi continued. Ultimately, as a result of a surprise ending (which the Mors are not sharing), Jim's life opens up from the smallest glimmer of hope.

Following the play's premiere this past summer at New York's Off-Broadway Manhattan Repertory Theatre, Eva and Gabi recalled the numerous times neighbors and acquaintances stopped them on the street to let them know they were still talking about the play. Central Floridians have an opportunity to join in on the conversation in February, during the play's Orlando premiere at Orlando Shakespeare Center-Mandell Theater on Feb. 17, 18, 24 and 25.

To find out more about "The Bigot" visit https://www.thebigotplay.com/