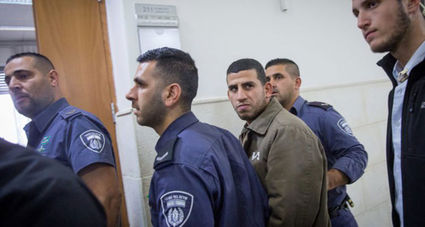 Palestinian terrorist Yassin Abu al-Qar'a, who is eligible for a terror salary.

In 2017 alone, the Palestinian Authority (PA) compensated terrorists and their next of kin to the tune of more than $347 million, reported Israel's Defense Ministry to the Foreign Affairs and Defense Committee Tuesday, according to a report by the Jerusalem Post.

The figures came from the PA's own records, which also revealed a schedule of payments that increase significantly in proportion to the crime committed. Specifically, terrorists sentenced to three to five years in prison receive from the Palestinian government $580 per month, which equals the average Palestinian income. The PA pays terrorists sentenced to 20 years or more in prison over $2,800 per month.

The PA supplements these base salaries with bonus payments for terrorists who also hold Israeli citizenship and those with children and spouses. Each additional box the terrorist can check off earns them an additional $15 to $120 dollars per month.

While Palestinians who commit the most serious crimes, such as murder, can clear around $2,900 per month via their terror salary, the average working Israeli only makes $2,700 in the same time period.

In response to this ongoing Palestinian policy, Knesset member Avigdor Liberman presented a bill to deduct terror salary totals from the funds Israel collects for the PA via various taxes and tariffs.

The bill mirrors US legislation called the Taylor Force Act, which conditions future American aid to the Palestinians on cessation of the terror salary system. The bill is currently working its way through the legislature with bipartisan support, clearing the House of Representatives and awaiting Senate action.

The Israeli version of the bill defines "terrorist" as any individual who has committed a security offense, regardless of whether a conviction was secured in court or whether the terrorist is still alive.