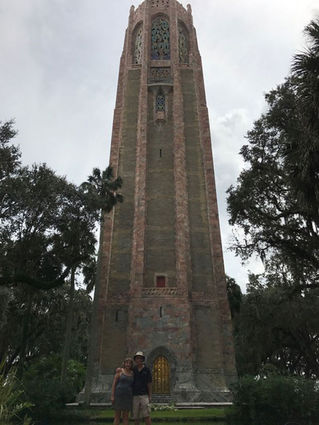 On Jan. 31, Jews will celebrate Tu B'Shevat, the day in which it is believed "trees come of age." For those of us who live in Central Florida, there is no more fitting a place to honor the Jewish "Earth Day" than at Bok Tower Gardens. The 60-acre sanctuary in nearby Lake Wales was the gift of Edward Bok. This son of impoverished Dutch immigrants became a highly successful publisher, a Pulitzer Prize-winning author, a respected humanitarian and an advocate of world peace and the environment.

Edward William Bok was born in Den Helder, Netherlands, in 1863. After a series of bad investments brought his father to financial ruin, the family immigrated to Brooklyn, New York, in 1870 to start a new life. Determined to provide his sons with a good education, Bok enrolled them in school the day after they arrived in Brooklyn, even though neither of them could speak a word of English.

Unfortunately, Bok's father's financial woes continued, and the family found itself in dire poverty. The two sons worked tirelessly to support their mother, who had lived most of her life with servants, by taking over all the household chores, picking up coal on the streets to light their fire and cook their food, and washing the windows of a bakery shop after school to supplement their father's income.

By the age of 13, Edward Bok quit school to take a job as office boy for Western Union Telegraph Company. Undeterred by his lack of formal education, Bok used every spare minute in self-study, including reading and absorbing information from an encyclopedia he had purchased with his paltry savings.

As a result of his intelligence, hard work, and dogged determination, Bok made a Horatio Alger journey in the publishing world. His rapid ascent included positions at the Henry Holt and Company, Charles Scribner's Son, The Brooklyn Magazine, and as co-founder with his brother of the Bok Syndicate Press. In 1889, at the tender age of 26, he was hired as editor of Curtis Publishing Company's The Ladies Home Journal. In 1896, he married the boss's daughter, Mary Curtis, and they had two son.

During his 30-year career, Bok used his position to champion numerous worthy causes, including social and environmental issues of the day. As a result, the Journal became the first magazine in the world to have over one million subscribers.

By 1919, the 56-year-old self-made millionaire had achieved his two goals of education and achievement. He retired from the Journal, focusing his time on the writing of his autobiography, "The Americanization of Edward Bok," which won the 1921 Pulitzer Prize. It was now time to pursue his third goal: service to his country.

Throughout his life, Bok had been guided by his grandmother's mantra to "make the world a bit better or more beautiful because you have lived in it." In the next several years, Bok used his wealth to create several awards, including the American Peace Award.

Bok not only wanted to help the world financially but also environmentally. During his family's visits to their winter home in Lake Wales, Florida, Bok had often wandered up to nearby Iron Mountain, (a notable Florida "peak" at 298 feet above sea level) to view the vistas and the sunsets. Although acreage was initially targeted for development, Edward purchased the land to establish a place that would "touch the soul with its beauty and quiet.

In 1922, Bok commissioned Frederic Law Olmsted, Jr., a famed American landscape architect whose credits included the National Mall, the Jefferson Monument, and the White House grounds, to carry out the task. Under Olmsted's direction, workers dug trenches, lay water pipes, and hauled thousands of tons of rich black soil up the "mountain." A year later, the barren sand hill had been transformed into a subtropical garden filled with trees, flowering bushes, flowers, and a reflecting pond that attracted squirrels and over one hundred varieties of birds.

Not yet satisfied, Bok wanted to bring the gift of music to his garden. He commissioned architect Milton B. Medary and stone sculptor Lee Lawie to design and construct a 205-foot, neo-Gothic and art deco Singing Tower carillon, one the world's largest and, according to many carillioners, the most acoustically perfect bell tower in the world.

In December 2015, Larry and I visited Bok Tower Gardens for the first time. Impressed with its beauty, we took out a membership and have returned again and again-by ourselves or with family and friends. Sometimes we just walk through Olmsted's well-designed garden paths, which offer hidden recesses, contemplative resting spots, picturesque vistas and breathtaking views of the Singing Tower. Each season brings its own beauty, including spectacular displays of azaleas, camellias, and magnolias.

More often than not, we take a tour given by one of Bok Tower Gardens many volunteer guides. Each visit has brought greater appreciation for this hidden gem-its history, its flora and fauna, its music, its architecture, and more insight into the genius and generosity of Edward Bok.

On the pathway leading into the gardens is an arch, which is inscribed with Bok's grandmother's admonition to "make the world a bit more beautiful." Each time I see those words, I think how closely they reflect Tikkun Olam, the Jewish moral principal that states every individual should leave this world better than he or she found it. Bok's beautiful garden, his stunning carillon, his 65 acres of trees and flowers and bushes and vistas, is his legacy, his gift-his way of making the world a better place.

I also think of how the son of an impoverished Dutch immigrant contributed so very much to Central Florida and his chosen country. To Edward Bok and every other immigrant who has come to our country to find a better life and who, through their journey made our country better-I say thank you.