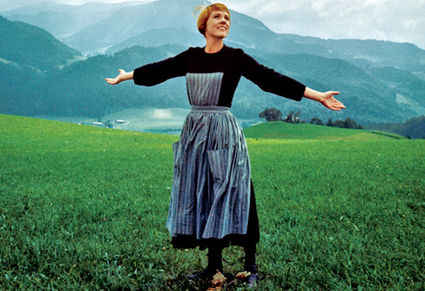 (Kveller via JTA)-"The Nazis were bad people who didn't like Jews," I heard myself saying to my 3-year-old.

I immediately questioned this rather disappointing explanation. Bad people? What does that mean? Haven't my wife and I always told our child that people aren't "bad" or "good," even if they do bad or good things? And isn't "didn't like Jews" rather an understatement? But, then, what exactly should you tell such a young child about the Holocaust?

I was in this predicament because of "The Sound of Music." That's right, I blame Julie Andrews for this.

We were on vacation, staying in a lovely cottage on a farm in Cornwall. My daughter and I were both ill-so when we saw the collection of DVDs the farm had, we thought we'd watch a film. After all, we don't have a TV at home, so watching something seemed like a relaxing plan for two sick people and their dedicated caretaker (aka my wife).

Though I hadn't seen "The Sound of Music" in years, I had fond memories of it. In my mind, it was a lighthearted film-one filled with charming songs-about a novice deciding whether to become a nun or to marry and gain seven children. I knew they escaped from the Nazis at the end, but I thought the war wasn't the primary focus of the story.

I was wrong. I was surprised, by both the length of the movie-you try getting a 3-year-old to sit still for 174 minutes, no matter how sick she is!-and by how dark the second half was. The songs weren't nearly as cheerful once the Nazis came to Austria, understandably enough. My daughter noticed the Nazi salutes and the Nazi flag and asked what they meant.

I'm of the view that children have a right to get answers to all their questions, and that there are individualized and age-appropriate ways of broaching any topic. So when she asked about the Nazis, I wanted to offer her an explanation that made sense-but I also didn't want to unduly frighten her. There is plenty of time in the future for her to learn about the Holocaust and other tragedies, and to grapple with their meaning (or lack thereof). And that's what led me to my anodyne and fairly unhelpful remark.

My daughter questioned the "didn't like Jews" part of my statement. So I paused the film to clarify that there are some people who take against others simply because of their skin color or religion or sexuality or gender or for other silly reasons. I told her that we don't agree with this, and that all people should have the same rights and should be treated equally. She nodded and we carried on with the film.

Over the next few days, as we gradually recovered, she often sang snatches of "So Long, Farewell" and "My Favorite Things" and "I Have Confidence." She wanted to act out certain (happy) scenes from the movie: "You pretend be a child scared of the rain, and I'll be Maria," she told me, before breaking into song and patting me in a comforting way.

I thought that was that. But then, about a week later, when we were back home and I'd nearly forgotten about the film, she asked me, "Will the Nazis come here?" Though her voice was calm, I understood then that, since seeing the movie, she'd been pondering the plot and our brief discussion about what it meant.

I took the opportunity to explain that, although some people still thought like the Nazis, the Nazis themselves had lived a number of decades in the past, and that we didn't need to fear them now in the same way. We discussed racism and anti-Semitism a bit more and talked about our society today. I tried to explain how prejudice often stems from fear and ignorance, but this last part, I think, was a little over her head.

After our conversation, she seemed thoughtful, as she was a bit quiet. She said, "I don't like Nazis. I don't want them to come to our house!" I told her that her other mother and I would protect her, and that there were lot of good people who were working for a more just and open world. I added that it was important for us to be a part of this work, too.

Then she asked if we could sing "My Favorite Things" again. I realized then that she truly understood the meaning of the song: We don't have to deny the things that worry or upset us, but there are things we can do to make ourselves feel better.

As our daughter gets older, my wife and I will help her develop her understanding of World War II and anti-Semitism. For now, though, it seems enough to make her aware of the issues without going into too much detail.

I never would have guessed that watching a film from our sick bed in the English countryside would have started us on such a deep and important conversation.

And for that I thank Julie Andrews.

B.J. Epstein is a senior lecturer in literature and public engagement at the University of East Anglia in England. She's also a writer, editor and Swedish-to-English translator.