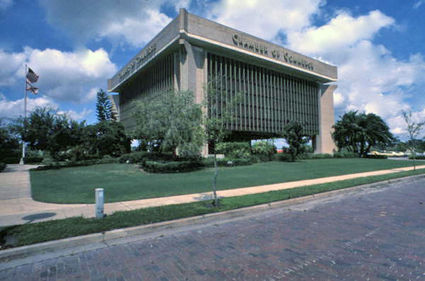 The Orlando Regional Chamber of Commerce building, site of the possible future home of the Holocaust Memorial Resource and Education Center.

For three years the Holocaust Memorial Resource and Education Center Board of Directors had been looking for a building that could house the ever-growing museum. Built in 1986, the museum was expanded to twice its size in 1994. Now, with the many programs and exhibits held at the Center, it is bursting at the seams. Anyone who has ever gone to one of HMREC's programs knows how quickly the museum's auditorium/exhibit room fills to capacity. Plus, the area schools that bring up to 150 students to the Center, makes it crowded for anyone else who wants to view any of the other exhibits.

As of Monday, Jan. 22, the search for the new building was completed as the Orlando City Council voted unanimously to accept a proposal to lease the Orlando Regional Chamber of Commerce, located at 75 S. Ivanhoe Blvd., to the Holocaust Center for 50 years at $1 per year.

"We had shared with the City our vision to move downtown several years ago, and Mayor Dyer and his team were both very supportive and also helpful," stated Mark Freid, outgoing president of the HMREC Board. "We looked at a couple different pieces of privately owned property that city leaders gave us guidance on. When those didn't work out, and the Chamber building became available, our conversations naturally evolved to a discussion about that building and the adjacent land as a possibility."

According to Pam Kancher, HMREC executive director, this is a "Memorandum of Understanding." In the agreement, the Center is responsible for $20 million in renovations to the building. The Center also plans to construct a 20,000-square-foot addition to the building for permanent interior exhibits and an auditorium.

Although the Orlando Sentinel stated that the museum would move into its new home in 2020, Kancher suspects it will take longer.

"It will take two to three years to raise the money," Kancher estimated, "and when we have enough money to 'turn dirt,' we will sign the lease and they will turn the keys over to us."

Kancher said that once they have the keys, it will take 18 months to two years to complete the renovations and additional build-on.

So for at least perhaps five years, "it's business as usual" at the Maitland location, said Kancher.

What will happen to the building currently located on the JCC/Federation campus? There is no debt owed to the Federation, according to Paul Lefton, Jewish Federation of Greater Orlando director of marketing and communication, the Holocaust Center owns the building.

"We are glad they are growing and will continue to work with them," Lefton stated. It is too early to make any decisions concerning what the Federation will do with the building.

The Center, which is currently 7,000 square feet, will be approximately 35,000 square feet at its new location. The museum will also have more exposure to the 66 million visitors to Orlando every year, which is a positive note to Thomas Chatmon, executive director of the Downtown Development Board and Community Redevelopment Agency, who is committed to bring culture and arts to downtown.

Mayor Buddy Dyer is also onboard with the agreement, calling it a "perfect fit" for the downtown area.

"Our move to downtown Orlando is significant for Central Florida and the Jewish community," Freid said. "It reflects our community's commitment to the values of respect and inclusion for all people, and that we can draw lessons from the Holocaust to bring those values to life, which is exactly what our founder, Tess Wise conveyed from day one."

"This project is truly about community, and that's why we're approaching the capital campaign effort a little differently," explained Freid. "Instead of a single campaign chair, this campaign is being led by a dedicated group of leaders that reflect the broad appeal, and what we expect to be broad support, for the new, expanded Holocaust Center." 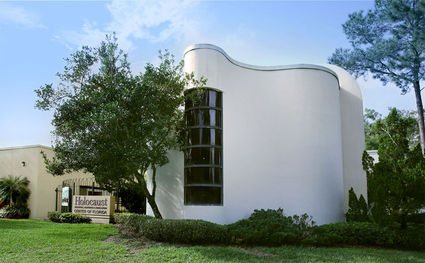 HMREC at its present location on The Roth Family JCC campus.

The HMREC Board of Directors recently installed its new officers, with Ellen Lang elected as president. Lang is the daughter of HMREC founders, Abe and Tess Wise. The couple purchased the Jerusalem stone of the Memorial Wall of the present museum building and their son, Steven, who lives in Israel, facilitated the cutting of the stone in Israel. As executive director, Tess was always the moving force behind the museum and focused on it as a mother tends to her child. And now, her daughter will oversee the museum's expansion and new location.

"We are profoundly grateful to the City of Orlando for its generous support and making it possible for us to grow our physical space as well as our impact combating hate and preserving civil and human rights," Lang told the Heritage. "This process is the result of several years of strategic planning and evaluation. This new phase will take several years, but we believe becoming part of the downtown community will increase public accessibility as well as visibility of our work."