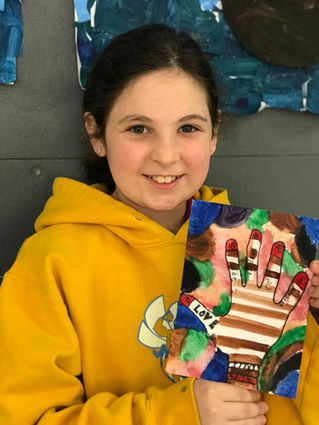 JAO student used brown and white stripes on her hand to be symbolic of how "we are all the same, united."

"The function of education is to teach one to think intensively and to think critically. Intelligence plus character-that is the goal of true education."-Dr. Martin Luther King, Jr.

The students designed paper hands with symbols and words inspired by the day. They included words such as "Mitzvah," "love," "shalom," "peace," "respect," "community," and "unity." One student used brown and white stripes combined on her hand to be symbolic of how "we are all the same, united."

In kindergarten and first grade, students studied two eggs, one brown and one white. They noted the similarities and differences of the eggs. Eventually, when their teachers cracked both eggs, they realized that even though the exterior may seem different, the inside is exactly the same. The lesson from Dr. King that we cannot judge people by "the color of their skin, but by the content of their character" rang true during the classes.

In second and third grades, students attended music class, and learned songs of freedom and hymns from the past. They spoke of segregation and the importance of unity.

Fourth and fifth grades participated in a lesson with JAO's head of school, Alan Rusonik, where they considered application of Leviticus 19:18: "Thou shalt love thy neighbor as thyself." With a list of Dr. King's quotes, students were able to draw connections between the teachings in the Torah and Dr. King's own beliefs and teachings. The students' day was filled with recognition of the importance of peace, kindness, dignity, and respect for others.