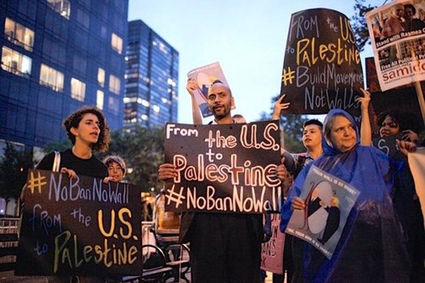 Leaders of several major American Jewish organizations have told JNS that they are supporting the Israeli government's decision to prevent the entry of foreign citizens who promote boycotts of Israel.

Israel's Ministry of Strategic Affairs on Jan. 7 released a preliminary list of 20 foreign organizations whose "central figures" will not be permitted to enter Israel because they have undertaken "significant, ongoing and consistent harm to Israel through advocating boycotts." There are six American groups on the list, including the American Friends Service Committee, American Muslims for Palestine, Code Pink, Jewish Voice for Peace (JVP), Students for Justice in Palestine and the U.S. Campaign for Palestinian Rights.

JVP Executive Director Rebecca Vilkomerson told JNS that until now, she has been traveling to Israel "approximately once a year, and those trips are usually a mix of personal visits and JVP work." Vilkomerson said the Israeli government "has not been in touch with us in terms of how they define JVP leadership," so it is not clear if the ban will apply only to JVP's senior staff or also to its other arms, such as its Academic Advisory Council.

Vilkomerson said there are "over 900 people on the [council]," but she declined to provide a list of their names. In the past, JVP press releases that mentioned the council stated that "the full list is available upon request."

A spokesperson for the Israeli Ministry of Strategic Affairs and Public Diplomacy told JNS that the determination regarding exactly who will be prevented from entering will be based on whether an individual engages in "ongoing, consistent, and significant action to promote the boycott, with each case being judge on its own merits." The spokesperson said an inter-ministerial team is still in the process of "formulating the criteria for implementation of the legislation," with a final list of banned organizations likely to be released in March.

JVP's Vilkomerson described the Israeli ban as "bullying." That characterization was challenged by Malcolm Hoenlein, executive vice chairman and CEO of the Conference of Presidents of Major American Jewish Organizations, who told JNS, "For JVP to complain about 'bullying' is the height of hypocrisy given their tactics." He was referring to incidents in which JVP activists reportedly have harassed pro-Israel speakers.

According to a memo issued by the Anti-Defamation League (ADL), JVP members at last year's Celebrate Israel Parade in New York City confronted a group of pro-Israel LGBTQ marchers, "cutting their microphones and blocking them from marching." The ADL also said JVP supported the expulsion of pro-Israel participants from last year's Chicago Dyke March on the grounds that their rainbow flags resembled Israeli flags, which JVP said represented "racism and violence." Also, according to the ADL, "JVP members have shouted down and interrupted campus speeches by guests whom they consider too Zionist."

A number of leading Jewish organizations have expressed support or understanding for the Israeli government's Jan. 7 decision.

AIPAC spokesman Marshall Wittman told JNS that while his organization does not take public positions on the Israeli government's internal policy decisions, "Every state has a right to determine who enters its borders, and the government of Israel has explained that its bar is limited to those who plan 'material action' against the Jewish state."

"Israel is under no obligation to hold the door open for anyone, or any organization that attempts to harm the state," B'nai B'rith International said in a statement to JNS. "The threat posed by BDS supporters goes well beyond mere policy criticism."

Betty Ehrenberg, executive director of the World Jewish Congress in North America, said, "The groups on Israel's list of BDS promoters totally undermine any prospect for peace by fostering hatred, bigotry, and anti-Semitism, which leads to violence and the endangerment of Israeli citizens."

When the Knesset last year gave preliminary approval to a law restricting the entry of foreign BDS advocates, the ADL and the American Jewish Committee (AJC) expressed disapproval. When contacted by JNS this week for their position on the new government decision-which is more limited than the Knesset bill because it specifically names 20 groups, rather than being a blanket ban-both the ADL and AJC did not respond.

Left-of-center groups, meanwhile, strongly criticized the Israeli government's move. Americans for Peace Now asserted in a press release that "boycotts are a legitimate form of peaceful, political expression, which must be protected in any democracy." It warned that the Israeli decision "increases the isolation of Palestinians living under occupation" and could lead to "the specter of Jews-or non-Jews-being interrogated about their political beliefs at Ben Gurion Airport."

But the Strategic Affairs Ministry spokesperson told JNS that the new regulations "explicitly exclude political criticism of Israel as a criterion for consideration in naming an organization."

In an interview with JNS, Paul Scham, president of Partners for Progressive Israel, argued that "calling BDS 'economic terrorism' is simply demagoguery," because in his view, "there is no plausible connection between the presence of a BDS activist and Israeli security."

Leaders of organizations representing Reform and Conservative Judaism declined to comment on the Israeli government decision, while Orthodox groups were supportive of the move. A spokesman for the Orthodox Union (OU) told JNS, "The OU's position on this, as with a wide range of other decisions made by the Israeli leadership, is to defer to the decisions of the duly elected democratic government of the State of Israel."

Rabbi Pesach Lerner, president of the Coalition for Jewish Values, which represents several hundred Orthodox rabbis nationwide, said, "It is routine for democratic countries to ban foreign nationals who wish to harm it. it would be irresponsible for a nation not to engage in elementary self-preservation. The goal of BDS is to destroy Israel, and it is prudent for Israel to respond as it has."

Section 212 of the current U.S. immigration law authorizes the exclusion of foreign citizens who are suspected of intending to engage in "any activity" related to "sabotage" of the government. It also prohibits the entry of anyone who "endorses of espouses terrorist activity," even if they are not involved in actual terrorism.

Restrictions on admission to the U.K. are even broader. Section 2 of the relevant British law states that a foreigner can be prevented from entering the country if the authorities decide that "the applicant's character, conduct or associations" make it "undesirable" to grant entry.