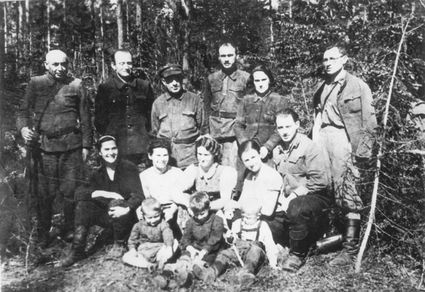 The Holocaust Memorial Resource and Education Center commemorated the International Holocaust Remembrance Day with the first part of a two-part series on Jan. 21 with a discussion of "Defiance" by Nechama Tec, which centers on the experience of the Bielski partisan group and their leader, Tuvia Bielski.

The film of the same name was viewed prior to the book discussion, which was led by Dr. Susan A. Bach whose father, Joe Abrams (Josef Abramowicz) and mother, Esther Greenberg (Grinberg) Abrams, were also members of the Bielski Partisan group.

The following is an article that Bach wrote about her own experience of growing up with parents who fought with the partisans.

The power of remembrance

By Susan A. Bach

The power of remembrance brings me memories of the sacrifices my parents made during the invasion of Poland, the planned annihilation of the Jews, and the struggles they endured as immigrants to America. I remember clearly my father's pride in becoming a naturalized citizen and that his children and grandchildren were a testament that the Nazi's failed in their endeavor.  To my parents it was a privilege to be able to raise a family and educate their children to remember the past in order to contribute to a better world.

My parents strived to live a normal life in American: working, raising a family, paying taxes and voting. They lived as Americans, yet in their memories, hearts and minds, their war experiences left its mark. This explains their extreme over protectiveness, fear of scarcity and disquiet in abundance. This is the world in which my brother and I were raised.

My father escaped from a ghetto to join the Bielski partisans in the forest in Poland. This partisan group is depicted in the 2008 movie "Defiance," based on the book by the same name. Life in the ghetto was harsh and dangerous. Life in the forest was also harsh and dangerous, yet it allowed for hope of survival because the Bielski's mission was to save Jews regardless of age, gender, ability to fight or social class.

My mother was hidden by Righteous Gentiles. She "lived" in a hole dug under the floor of a barn and subsisted on raw potato peels and occasionally stale bread. When the farmers could no longer offer protection because of the risk to their lives, she found her way to the Bielski's.

After the war, my parents made their way to Italy where I was born in a Displaced Person's Camp. Life was still hard, but it was safe and allowed for hope. We immigrated to America in steerage on a converted cargo ship, which docked in New York harbor on Nov. 21, 1949. Little wonder that Thanksgiving was always my father's favorite holiday. When I looked around our Thanksgiving table in those early years, there was only immediate family since nearly all perished in the Holocaust.

As a child I wondered what my grandparents looked like, how they might have played with me and what I might have learned from their wisdom. I never had answers to those questions. Today at our Thanksgiving table we are blessed with children and grandchildren. I now see what I missed as I enjoy family and grandchildren!

When my son was in middle school and started asking his grandparents questions about their background, it was evident that their memories did not fade with time. They told stories of bravery and resourcefulness, of suffering and loss. Those stories were captivating. I often wondered if I would have had the will to fight and survive. I still have that question.

Now when I read and hear about genocide, despite the Shoah's haunting testament of "Never Again," how can I not remember?