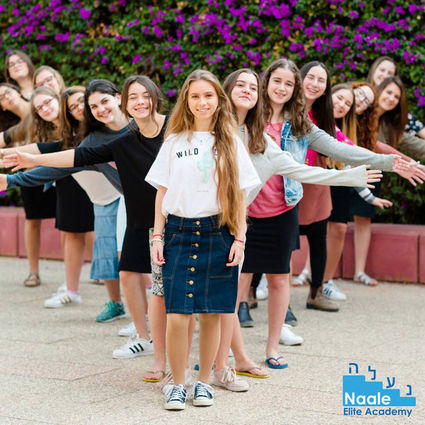 Naale's outstanding Amana high school for girls, located in cool and calm Kfar Saba is one of the best Orthodox schools for girls in Israel.

In 1992, when Soviet Jewish parents were looking for ways to immigrate to Israel, a school was started by the Jewish Agency and the Israeli government that provided a way for Soviet youth to study in Israel. That school is Naale Elite Academy. Since the program started 25 years ago, there have been 16,000 students and graduates from nearly 30 countries, including the U.S., U.K., France, Germany, South Africa, Australia and the former Soviet Union, among others. At the end of August, 503 arrived to start 10th grade in Israel-74 of them from North America.

This isn't a one-year high school program (although if a student wishes to opt out at any time, they can). Students who participate in the Naale program have the opportunity of a lifetime to spend their high school years learning Hebrew, connecting to their Jewish identity, discovering Israel, living among their peers in youth villages (sort of like college campuses) under supervision, and graduate with an internationally recognized high school diploma.

After graduation, they will be ready to move on to the next stage of their lives anywhere in the world with greater confidence, irreplaceable life-skills, and the internationally recognized Israeli 'Bagrut' matriculation.

Sending your children away to study abroad is usually an extremely expensive endeavor. However, with the exception of only two payments-a one-time nonrefundable scholarship application fee of $600 and an additional $600 upon acceptance, the Naale Elite Academy is completely free. This includes full airfare to Israel at the beginning of the program, tuition, room and board, off-campus travel expenses, special trips, spending money, health insurance and laundry services is fully funded by the Israeli Ministry of Education and the Jewish Agency for Israel.

Scholarships are based on average or above average academic ability and psychological tests. According to Chaim Meyers, director for the Western World Region, students are screened for their social skills, emotional stability and independence for their age.

"There are a lot of challenges to living in a foreign country, away from family," Meyers stated. "Some students aren't mature enough."

Einat Cohen-Nissan Glen, Southern United States representative, stated that the program has a 75 percent acceptance rate, and a 90 percent start-to-finish rating because of the screening.

How does it work?

Students in either ninth or 10th grade start the program in an intensive Hebrew ulpan. They learn to speak, read and write Hebrew. Those who excel in their Hebrew studies can enter mainstream Israeli classes or choose to be in English-speaking classes. After finishing the Hebrew course, they move on to studying the core academic subjects and electives. In addition to academic studies, a wide range of activities, including clubs, volunteer work, music, sports, films, etc.

As there are many aspects to Jewish identity, there are eight schools across Israel in the Naale Elite program:

• Mosenson in Hod Hasharon offers a well-rounded education. It is coed.

• Amana is a yeshiva high school for girls. It is a religious school in Kfar Saba.

• Shaalvim is the yeshiva high school for boys offering academic and religious education.

• Beit Chana, located in Tzfat, is designed for the daughters of shluchim and offers a Kodesh curriculum with advanced studies in Nigleh and Chassidus.

• Beit Chaya Mushka is a Chabad high school for girls geared toward daughters of Hebrew speaking shluchim and is located in Kiryat Shmuel. 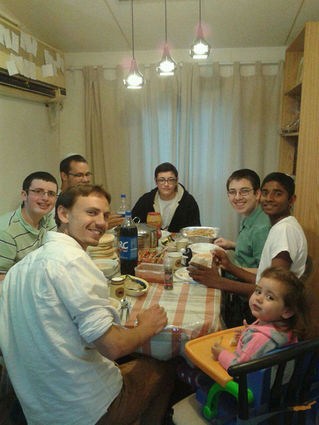 Students from Na'ale Shaalvim enjoy a BBQ with their madrich and his family.

• Ayanot is a coed youth village based on values of tolerance, equality and social involvement. In addition to its core subjects, students focus on arts, music and agriculture. It is located in Nes Tziona.

• Dror Elite Academy is located in Jerusalem. It is a coed observant high school with a pluralistic approach. The program emphasizes text studies, social acceptance and an understanding of many forms of Jewish expression.

Registration can be done online. Upcoming screening for Florida residents is held in Miami on Feb. 18, and on June 13.