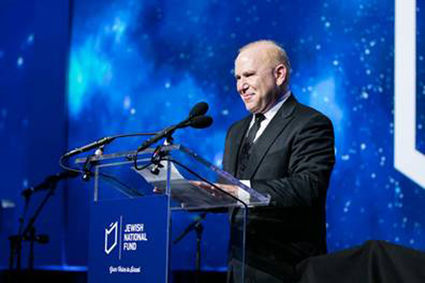 The Jewish National Fund is pleased to announce that Bruce K. Gould has been appointed to the positions of president-Elect and vice president of Campaign for the National Board. This comes at critical time, as JNF's lay leadership and professional team are diligently working on the second half of its One Billion Dollar Road Map for the Next Decade campaign. He will continue to be instrumental in helping JNF connect communities across the country to the people and land of Israel.

"My involvement and leadership in JNF began when I was a child and brought Tzedakah to Sunday School each week to place in the famous Blue Box to plant trees in Israel," said Gould. "I am a product of JNF's young leadership development program, and it is through such platforms that I now have the opportunity to lead the fundraising campaign of one of the nation's largest Jewish nonprofit organizations."

In 1996, Gould took a trip to Israel with Jewish National Fund that forever changed him and set him on a path to do everything he could to further the organization's mission. Since that trip, designed as a future leader's mission, he has served as President of the Orlando Campaign Cabinet, Florida Zone President, Chairman of the Florida Zone, National Vice President of Zones and Regions, Assistant Treasurer of JNF, Assistant Vice President of Campaign and Major Gifts Chairman. This impressive list of roles has perfectly instilled Gould with the knowledge and drive to take on the position of President of Jewish National Fund at the end of current President Dr. Sol Lizerbram's tenure.

"Bruce is an incredible example of how philanthropy and leadership development is a marathon, not a sprint," said JNF CEO Russell F. Robinson. "It has been amazing to watch him grow as a leader within Jewish National Fund. His dedication and passion for Israel is immeasurable and I am thrilled to have him as our President-Elect and Vice President of Campaign."

Gould is also on JNF's Boruchin Fund Committee and is the Chair of Development, and member, of the Alexander Muss High School in Israel Board, JNF's flagship study abroad program. In addition to his work with JNF, Gould has served on many philanthropic boards, including the Jewish Community Center of Greater Orlando, the Holocaust Memorial and Education Center of Orlando, Touro Law Center's Foundation Board of Trustees, New York University Law School's Dean Council, and the University of Central Florida's Foundation Board.

"My parents, along with my brother, have chosen to concentrate on educational endeavors to help the next generation who can't otherwise afford it, better themselves," said Gould. "A large part of my involvement in JNF centers on engagement and educating the next generation on the importance of our heritage and passing on our Jewish legacy to our children."

"My family has always had a charitable heart and my passion for Israel and the Jewish people was instilled in me by the examples they set," said Gould. "It was Jewish National Fund that showed me how I could become an impact philanthropist, even at a young age, and play a part in building our homeland."

He created The Gould Legacy Society to help JNF establish a permanent endowment. Bruce recently had the privilege of dedicating the Bruce K. Gould Amphitheater and the new Commemoration Hall to honor those who gave their lives in the battle for Jerusalem at Ammunition Hill, a centerpiece of JNF's initiative to preserve Israel's historic sites.

"I feel that Jewish National Fund is the only organization that has a direct connection to the land and people of Israel," said Gould. "I am thrilled to assume the role of President after Dr. Lizerbram and lead the organization to bigger and more profound challenges as it continues to build the land of Israel for generations to come."

Gould is an attorney and was a principal of Gould Publications Inc., a family-owned publishing business specializing in law books and treatises for the legal and law enforcement communities. He is an avid long distance cyclist and has helped raise money and awareness for the Arava Institute in the Negev through the JNF Israel Ride initiative.

To learn more about JNF's One Billion Dollar Roadmap for the Next Decade campaign and connect with Bruce K. Gould, please do so via bgould@jnf.org.