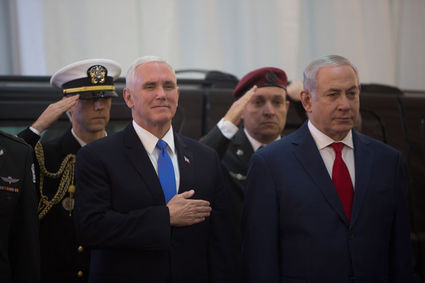 WASHINGTON (JTA)-When Mike Pence moved to Washington earlier this year, he and his wife took with them a framed phrase they had for years hung over their fireplace in their Indiana home, and then over the fireplace in the governor's mansion in that state.

Now it hangs over the mantle at the vice president's residence at the Naval Observatory in Washington, D.C. The words, from the Book of Jeremiah, read: "For I know the plans I have for you, plans to prosper you, and not to harm you, plans to give you a hope, and a future."

The "you" is the people of Israel, and Pence, an evangelical Christian, makes that clear when he addresses pro-Israel audiences. "They're words to which my family has repaired to as generations of Americans have done so throughout our history, and the people of Israel through all their storied history have clung," Pence said last August at the annual conference of Christians United for Israel.

Pence took that message to Israel this week on a trip ostensibly aimed in part at reviving the prospects for Israeli-Palestinian peace. He is seen as a key Trump administration figure when it comes to Israel policy and reportedly helped nudge the president to recognize Jerusalem as Israel's capital.

Pence's first visit to Israel as vice president led some to ask to what degree are his views, and the administration's policies, shaped by the brand of evangelical Christianity that invests his faith?

Pence, a convert to evangelical Christianity from Roman Catholicism, has spooked some liberals with his insistence on rooting his pro-Israel bona fides in faith as much as realpolitik considerations of the United States' national security. Their fear is that a messianic outlook might run riot over one of the most delicate dilemmas facing successive U.S. governments, namely stability in the Middle East.

"Trump has handed Israel policy to Evangelicals," The Forward's Jane Eisner wrote last week in an editorial as Pence headed to Israel. "That's terrifying." Like many liberals, she worries that policy will be driven by evangelical beliefs that certain conditions-like Jewish control over the West Bank and sovereignty in Jerusalem-fulfill biblical prophecies.

Republicans and conservatives say that it is reductive to believe that Pence shapes his views solely according to the tenets of his faith.

"They always highlight the fact that he's an evangelical, as if that's a pejorative when in fact [Pence and other evangelicals] are motivated first and foremost by shared values with Israel," said Matt Brooks, the director of the Republican Jewish Coalition, who has known Pence for years. "And not just by the shared values, but the important efforts of collectively standing up to threats of Iran, pushing back on ISIS, and on radical Islam, or whether it's being a critical democratic foundation in a very dangerous place. There are so many places where U.S. and Israel's interests intersect."

Pence began his speech to the Knesset by outlining the shared values Brooks described.

But he quickly pivoted to depict support of Israel as both biblical (Deuteronomy 30:4, to be exact) and rooted in an American strain of Christianity.

"Down through the generations, the American people became fierce advocates of the Jewish people's aspiration to return to the land of your forefathers, to claim your own new birth of freedom in your beloved homeland," he said to applause. "The Jewish people held fast to a promise through all the ages, written so long ago, that 'even if you have been banished to the most distant land under the heavens,' from there He would gather and bring you back to the land which your fathers possessed."

Pastor John Hagee, the founder of Christians United for Israel, described a natural trajectory for evangelical supporters of Israel from biblical belief to the more practical modern reasons for supporting the state.

"The promises of the Hebrew Bible are the foundation of Christian Zionism, but our motivations for supporting Israel do not end there," he told JTA in an email. "We see in Israel a democracy that shares Western values and is a force for stability in the Middle East. While standing with Israel is a biblical mandate, it is also a moral imperative and in the national security interests of the US. I am confident that all three of these considerations inform the Vice President's approach to the Middle East and I believe that is perfectly appropriate."

Pence has since the outset of his political career made it clear that his support for Israel is first grounded in biblical precepts. "My support for Israel stems largely from my personal faith," he told Congressional Quarterly in 2002, a year after he was first elected to Congress. "God promises Abraham, 'those who bless you, I will bless, and those who curse you, I will curse.'"

Sarah Posner, a journalist who for years has tracked evangelicals, said Pence's faith seemed to be preeminent in his consideration of Israel. "I don't think he is thinking about that in terms of shared democracy or not shared democracy, he's thinking about it providential terms, that these missions are God's plans for Israel," said Posner, a reporting fellow at The Nation Institute's Investigative Fund.

It's hard not to see Pence's belief as an impetus driving Trump's recognition of Jerusalem, said Daniel Seidemann, an Israeli expert on Jerusalem who advocates for including all the city's sects and groupings in considering its permanent status.

"It would be fine for him to have those beliefs, if he weren't the vice president and shaping policy," Seidemann told JTA. "Jerusalem has been witnessing over the last 20 years the ascendancy of faith communities that weaponize religion."

Pence proudly stood with Trump in the White House when the president announced the recognition of Jerusalem as Israel's capital, and he appears to have accelerated the planned move of the U.S. embassy. Trump last week said it would take at least three years to move the embassy, but Pence in Israel this week said it would be in place before 2019 is out.

"The United States decided to go through these hollow gestures on Jerusalem rather than advancing its own interests and the interests of Israel and the Palestinians by engaging in a sober attempt to resolve the issue," Seidemann said.

Pence's trip, by including only Jewish sites and skipping meetings with other faith leaders, was contributing to the weaponization, Seidemann said.

Christian faith leaders declined to meet with Pence during his visits to Egypt and Israel; various reports framed their objections as a reaction to policies they feared put religious imperatives before meeting the needs of Arabs in the region, including the Christian minority.

Mae Elise Cannon, the director of Churches for Middle East Peace, an umbrella group that includes most of the Christian denominations in Israel and the West Bank, told JTA that local Christians were wary of how Pence framed his support for Israel as a matter of Christian faith.

"They didn't meet with him because they don't view him as an honest broker or an unbiased broker," she said.

Still, some conservatives charge liberals with weaponizing religion, and using Pence's faith as a way to discredit otherwise normative policies.

"That vast numbers of Americans are inspired by the Bible to support Jewish rights in their ancient homeland isn't so much a function of the left-right conflict as it is an integral part of the nation's political culture," wrote Jonathan Tobin, a former executive editor of Commentary and current editor in chief of JNS.org. "Those turned off by Pence's rhetoric need to ask what exactly it is about a desire to respect Jewish rights and demand that Palestinians give up their century-old war on Zionism that annoys them so much."