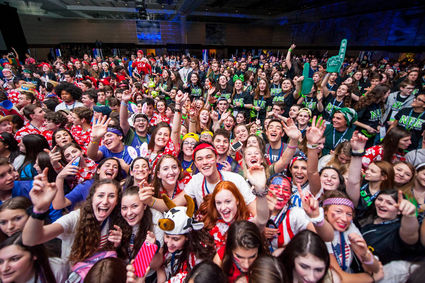 Participants in the 2017 BBYO International Convention held in Dallas, Texas.

ORLANDO-At a time when young people are socializing more online and interacting less in person, thousands of teens converged on Orlando Thursday, Feb. 15 for the BBYO International Convention, which goes through Monday, Feb. 19. With over 3,000 teens from 36 countries, and thousands of educators, thought and business leaders, celebrities, political figures and philanthropists coming together for BBYO International Convention over Presidents Weekend, this epic event will offer opportunities for Jewish teens to connect with their peers and consider how to make the future their own. IC is one of the largest Jewish communal leadership events in North America and the single-largest gathering of Jewish teen leaders worldwide.

As attendance at IC skyrockets each year, the event is a case study for teens showing increased demand for high-quality Jewish experiences with their peers. This year's convention theme, "Together We Will," speaks to today's vital need and incredible opportunity for young people to unite communities of all faiths, races and cultures toward shaping a stronger, fairer and more democratic society for all people.

IC 2018 will offer a range of programming throughout the weekend that will focus on empowering and energizing teens to partner with each other to bring new ideas to fruition, including nearly 60 direct service projects and leadership labs at sites throughout the Orlando area. The programming will also spotlight inspiring stories from speakers who took an unlikely path to their current work and place in life. Additionally, the conference will showcase the diversity of the BBYO community, with 235 delegates from 36 countries attending the iconic event. For the first time, delegates from Australia, China, Colombia, Mexico and Spain will join the conference, enhancing BBYO's celebration of Jewish culture in a way that only BBYO is poised to do.

International Convention will also be home to a gathering of "Movements and Shakers," sponsored by BBYO, NCSY, NFTY, USY and Young Judaea. This conference of more than 100 professionals and volunteers will meet to explore collaboration opportunities around reaching and inspiring Jewish teens.

"This is going to be a weekend unlike any other, as teens gather in Orlando to interact with diverse and compelling leaders they would not have access to anywhere else," said Matthew Grossman, Chief Executive Officer of BBYO. "Participants are going to leave with a great deal to think about, and our expectation is that they'll bring the spirit of creativity and desire for action cultivated here to future endeavors."