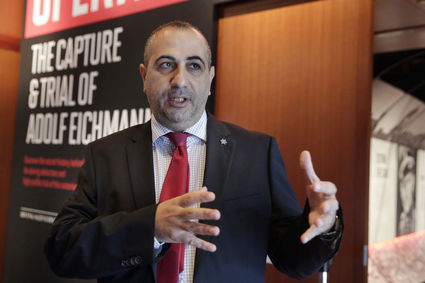 The Holocaust Memorial Resource & Education Center of Florida, in partnership with the Florida Holocaust Museum, will sponsor a conversation with Mossad agent Avner Avraham on Wednesday, Feb. 21, at 6 p.m.

Avraham curated the exhibit titled Operation Finale: The Capture & Trial of Adolf Eichmann, which is on exhibit at the Florida Holocaust Museum in St. Petersburg, Fla. His talk will feature "behind the scenes" stories of the capture of Adolph Eichmann and the importance of his trial.

Fifty-six years ago, Adolf Eichmann, who had been in charge of transporting millions of European Jews to death camps, sat in a courtroom for a trial that would be among the first in history to be completely televised. The trial captivated millions of people across the globe and it was the first time many of the details of the Holocaust were revealed. The dramatic story behind one of the world's most notorious escaped Nazi war criminals being brought to justice is told using recently declassified artifacts from the Mossad, Israel's Secret Intelligence Service. Operation Finale: The Capture & Trial of Adolf Eichmann opened to the public on Saturday, Feb. 10, and is on display through July 15, 2018 at The Florida Holocaust Museum, located at 55 Fifth Street South in St. Petersburg, Florida.

Avraham is a world-renowned expert in Mossad operations, lecturer, writer, exhibition and film producer, and curator. He is currently a senior advisor to the Hollywood film "Operation Finale." In the past, Avraham served as a major in the Israel Defense Forces, an intelligence officer, and a detective in the Israel Police.

There will be a short Q&A following his presentation.

This program is generously sponsored by Patti and Roy Ambinder.

For more information regarding the Holocaust Center's programs and exhibits, see http://www.holocaustedu.org.