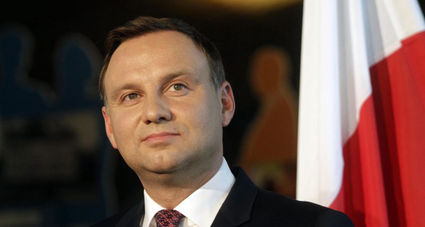 (JTA)-Polish President Andrzej Duda signed and finalized a law limiting rhetoric about the Holocaust, leading to a rebuke from U.S. Secretary of State Rex Tillerson.

The United States is "disappointed," Tillerson said Tuesday, following Duda's final approval of a law introduced on Jan 26 in the Polish parliament. It prescribes up to six years in prison to anyone who blames the Polish state or nation for crimes the law says were perpetrated exclusively by Nazi Germany during World War II.

The "enactment of this law adversely affects freedom of speech and academic inquiry," Reuters reported Tillerson as saying.

In announcing that he would sign the legislation, Duda added that he would send it to Poland's Constitutional Tribunal for review. Ukraine, Lithuania and Latvia have passed similar laws since 2010.

The State Department, in an unusual statement last week, said the law could have "repercussions" for U.S.-Polish relations.

Israeli Prime Minister Benjamin Netanyahu said he opposed the law, which he called "baseless." Yad Vashem, Israel's state authority on the Holocaust, said it understands the frustration in Poland with "misleading" terms like "Polish death camps" but added it opposed the law because it would stifle historical research and debate about the Holocaust.

Unlike most European nations under Nazi occupation, Poles were not allowed any degree of self rule and none of the Polish state's organs were integrated into the Nazi-led genocide. In addition to 3 million Polish Jews, the Nazis killed 1.9 million Polish non-Jews, whom they classified as racially inferior to Aryans.

Nonetheless, Polish individuals, including fighters in resistance militias, killed thousands of Jews during the Holocaust, according to Holocaust historian Efraim Zuroff of the Simon Wiesenthal Center. Many other Jews were betrayed to the Nazis by non-Jewish Poles.

However, Poland and the Netherlands are the only countries in Europe where resistance groups were formed exclusively to save Jews from the Holocaust. Poland has the highest number of Righteous among the Nations-individuals recognized by Yad Vashem and Israel for risking their lives to save Jews from the Holocaust. Its tally of more than 6,700 Righteous is followed by the Netherlands' 5,595 recipients of that honor.