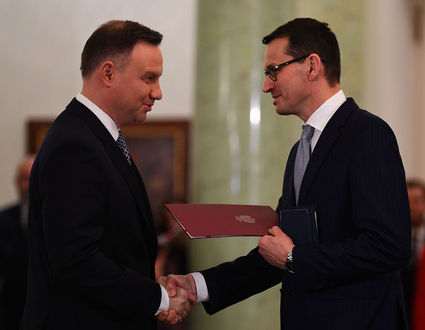 Polish President Andrzej Duda (l) nominating Mateusz Morawiecki to be the prime minister at the presidential palace in Warsaw, Dec. 11, 2017. Both support the controversial law on the term "Polish death camps."

(JTA)-In 2015, Ukraine's president signed a law whose critics say stifles debate on the historical record of World War II and whitewashes local perpetrators of the Holocaust.

Law 2538-1 criminalized any rhetoric insulting to the memory of anti-communist partisans. And it celebrates the legacy of such combatants-ostensibly including the ones who murdered countless Jewish and Polish citizens while collaborating with Nazi Germany.

The law generated some backlash, including an open letter by more than 70 historians who said it "contradicts the right to freedom of speech," ignores complicity in the Holocaust and would "damage Ukraine's national security."

But as with similar measures in Europe's ex-communist nations, the Ukraine law generated little opposition or even attention internationally-especially when compared to the loud objections to a similar measure in Poland that was signed into law on Tuesday by the president. The law had passed both houses of parliament in recent days. The United States and Israel joined historians and Israel's Yad Vashem Holocaust authority in decrying the bill.

"The Ukrainian and Polish laws are similar, but in Ukraine's case we didn't see anything even close" to the avalanche of condemnations that Poland received, said Eduard Dolinsky, director of the Ukrainian Jewish Committee and a longtime campaigner against Holocaust revision in Ukraine. "I wish we had; maybe this law could have been stopped in Ukraine."

To activists like Dolinsky, the singling out of Poland reflects the ongoing politicization of the debate on Eastern Europe's bloody World War II history. They say the conversation is distorted by geopolitical tensions involving Russia, populism, ignorance and unresolved national traumas.

There are clear similarities between the Ukrainian and Polish laws, according to Alex Ryvchin, a Kiev-born Australian-Jewish journalist and author who has written about the politics of memory in Eastern Europe.

"Both seek to use the legitimacy and force of law to enshrine an official narrative of victimhood, heroism and righteousness while criminalizing public discussion of historical truths that contradict or undermine these narratives," he said. Yet, he noted, "The reaction to the Polish law has indeed dwarfed the response to persistent state revisionism elsewhere in Europe in spite of the fact that the rate of collaboration was generally lower in Poland than in Ukraine and Latvia."

The Baltic nations of Lithuania and Latvia were pioneers in nationalist legislation that limits discourse about the Holocaust in their territories. Critics say these laws also shift the blame for the murder of Jews, which was done with local helpers, to Nazi Germany alone. They also seem to equate the Nazi genocide with political repression by the Soviet Union-which many in the former Soviet Union blame on Jewish communists.

In 2010 Lithuania-a country where Nazi collaborators virtually wiped out a Jewish community of 250,000-amended its criminal code, prescribing up to two years in jail to anyone who "denies or grossly underestimates" the crime of genocide or "other crimes against humanity or war crimes committed by the USSR or Nazi Germany against Lithuanian residents."

Similar legislation in Latvia from 2014 imposes up to five years in jail for those who deny the role of "the foreign powers that have perpetrated crimes against Latvia and the Latvian nation," without mentioning the involvement of Latvian SS volunteers in murdering nearly all of the country's 70,000 Jews.

The denial of local culpability during the Holocaust is at the root of opposition to Poland's law, which sets a maximum of six years in jail for "whoever accuses, publicly and against the facts, the Polish nation or the Polish state of being responsible or complicit in the Nazi crimes committed by the Third Reich" or "grossly diminishes the responsibility of the actual perpetrators." On Tuesday, President Andrzej Duda said he would sign the laws (which he did later in the day), finalizing them, but also refer them for review by Poland's highest court.

Israeli Prime Minister Benjamin Netanyahu, who in the past has been criticized for not calling out his country's Eastern European allies on these issues, called the Polish legislation "baseless" and said Israel opposed it The U.S. State Department in a statement suggested it could have "repercussions" for bilateral relations with Poland.

Israeli Education Minister Naftali Bennett's scheduled visit to Poland this week was canceled after he criticized the law, which Israel's embassy in Poland said was generating anti-Semitic hate speech in the media.

Back in Israel, the Polish Embassy condemned what it called ignorant remarks by Yair Lapid, a prominent opposition leader. Citing his credentials as the son of a Holocaust survivor, Lapid said the Polish law is designed to hide how Poland was "a partner in the Holocaust."

Jewish organizations, including the Simon Wiesenthal Center, said for their part that they understand the Polish frustration with terms like "Polish death camps," which seem to shift the blame for Nazi war crimes to Poland-one of the few Nazi-occupied countries where the Nazis did not allow any measure of self-rule or integrate locals into the genocide.

And the term is especially offensive in Poland, where the Nazis killed at least 1.9 million non-Jews in addition to at least 3 million Jews.

But, many Jewish groups added, the legislation in Poland ignores how many Poles betrayed or killed Jews and is therefore detrimental to the preservation of historical record and free speech.

Dolinsky in Ukraine isn't a fan of the Polish legislation, either.

"But I don't quite understand why it and only it provoked such a strong reaction," he added. "We needed that strong reaction two years ago in Ukraine. This fight needs to apply to all these cases. For the pressure to be effective, it shouldn't be selective."

Dolinsky believes that Ukraine-which, unlike Poland, shares a border with Russia-is getting a free pass from the West because it is subjected to hostility from Russia under President Vladimir Putin.

In 2014, Russia annexed Crimea from Ukraine amid ongoing psychological warfare against the Baltic nations, often involving the deployment of Russia's mighty army around those countries in blunt loudspeaker diplomacy.

"There is a lot of Russophobic sentiment worldwide and it means international silence on countries with a conflict with Russia," said Joseph Koren, chairman of the Latvia Without Nazism group.

"Poland and Hungary are in a different category," agreed Dovid Katz, a scholar of Yiddish in Lithuania and longtime campaigner against Holocaust distortion there. The singling out of Poland and Hungary, he said, is "not least because the issues of the Holocaust, anti-Semitism and restrictions on democratic expression in these countries have never been perceived primarily through the same binary lens of pro-and anti-Putin."

Under that alleged cover of silence, in Ukraine and the Baltic countries there is a rapid lifting on taboos that had been in place for decades on the honoring of war criminals, even including SS volunteers who enthusiastically participated in the mass killings of Jews and Poles.

Largely ignored by the international media, Latvian President Raimonds Vejonis last week gave the final approval for a law that offers financial benefits to all World War II veterans-including SS volunteers who murdered Jews. Latvia is the only country in the world known to have an annual march by SS veterans, which takes place with the approval of authorities' on the country's national day in the center of its capital, sometimes with mainstream politicians in attendance.

Last year, the municipality of Kalush near Lviv in Ukraine decided to name a street for Dmytro Paliiv, a commander of the 14th Waffen Grenadier Division of the SS, also known as the 1st Galician.

Ukraine's state television observed a moment of silence for the first time last year for Symon Petliura, a nationalist killed by a Jewish communist for Petliura's role in the murder of 35,000 to 50,000 Jews in a series of pogroms between 1918 and 1921, when Petliura was head of the Ukrainian People's Republic.

"There is less willingness to speak out on Ukraine in media, in the scientific community and in Western governments, so it seems," Dolinsky said.

But this alleged turning of a blind eye, he added, is a disservice. "Ukraine needs to join Europe as a civilized member of that family of nations. And for that to happen, it needs to speak honestly and openly about its history," he said.

To Ryvchin, the Australian author, the "particularly forceful reaction to the Polish law is likely because Poland is seen as the epicenter of the Holocaust," he said. The Germans built extermination camps only in Poland, according to Holocaust historian Efraim Zuroff.

"Any attempt to distort or disguise what happened in Poland is seen as a particularly egregious attack on the history of the Holocaust and the memories of the dead," Ryvchin said.

Ironically, Poland is perhaps singled out for criticism because of the country's vocal civil society and the lively debate it is generating over the politics of memory, Katz suggested.

Even today, he said, Poland and Hungary "have robust liberal movements that themselves counter official government policy on many issues-unlike the Baltics, where dissent is often quashed using the full force of the law."