The truth behind the Pulse massacre 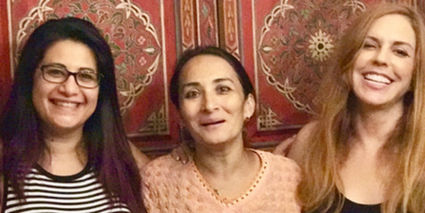 Twenty months after the terrorist attack at Pulse Nightclub, three courageous women-a Muslim reformer, a Jewish feminist and an ex-Muslim-each of whom have first-hand experience with the trauma resulting from these attacks, will hold an honest, responsible and long overdue discussion about the causes of bigotry and terrorism.

This Women's interfaith panel discussion-titled Three women, One world, One peace-will be held Sunday, Feb. 18, at the American Legion Post 53, 2874 Sanford Ave in Sanford. A coffee/pastry reception till be held at 11 a.m., and the panel discussion will be from noon to 1:30 p.m.

They will discuss how the Pulse massacre came to happen. What was the mindset of the perpetrator of this vicious murdering spree? Will there be more of these attacks in the future?

Asra Q. Nomani, Yasmine Mohammed, and Orli Peter, Ph.D. have each been personally affected by violence, understand this essential principle and have joined hands and hearts to begin a candid and courageous conversation on healing after trauma.

Event organizer, Debra Corso, will moderate the discussion. Corso and her family had a personal connection to the attack at Pulse, and she is now a community activist, devoted to ending extremism and religiously sanctioned hatred and violence.

Asra Q. Nomani is a former Wall Street Journal reporter and the author of two books, including "Standing Alone: An American Woman's Struggle for the Soul of Islam." A former scholar in the practice of journalism at Georgetown University, she is co-director of the Pearl Project, a faculty-student, investigative-reporting project into the kidnapping and murder of her former colleague, Wall Street Journal reporter Daniel Pearl.

She is a cofounder of the Muslim Reform Movement, which advocates for an interpretation of Islam that promotes peace, secular governance and human rights, including rights for women, LGBTQ and atheists. Nomani has also testified before the U.S. Senate Committee on Homeland Security, and has appeared on Real Time with Bill Maher.

Yasmine Mohammed is an Arab-Canadian college instructor, activist, podcaster and writer who has written a memoir, "From Al Qaeda to Atheism." Mohammed's message is one of hope to fellow ex-Muslims, atheists and freethinkers.

Orli Peter, Ph.D. is a neuropsychologist and clinical psychologist who directs Accelerated Psychology, a clinic in Beverly Hills that integrates neuropsychology and clinical psychology to help traumatized people. Dr. Peter is a former associate professor of psychology and director of the Graduate Psychology Programs at Mount St. Mary's University. She also assisted in terrorism research at Rand Corporation. Her experiences as the daughter of a Holocaust survivor and as a trauma survivor inspired her to research, teach, and provide treatments for the many survivors around the world, including survivors of the 9/11 attacks, Iranian refugees, sexual abuse victims, and traumatized Palestinian and Israelis.

Debra Corso, the event's organizer, is a yoga instructor, living in Central Florida and is the panel's local speaker. She led workshops and retreats at home and abroad for nearly 15 years.

The cost for the event is $10; free for Heritage readers or if you mention Chris Hart, radio commentator.