By Ben Sales and Josefin Dolsten 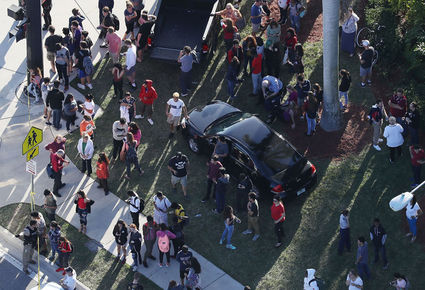 A look at the aftermath of the shooting at Marjory Stoneman Douglas High School in Parkland, Fla., Feb. 14, 2018.

(JTA)-They volunteered. They played soccer. They went to camp. They were sweet, mature and easygoing. They were just beginning their lives, or helping others on their way.

And one died so that others could live.

Jewish students and staff were among the 17 people who were killed when a gunman entered Marjory Stoneman Douglas High School in Parkland, Florida, on Wednesday afternoon and began shooting. Among the Jewish victims are first-year students Jaime Guttenberg, Alex Schachter and Alyssa Alhadeff, senior Meadow Pollack and Scott Beigel, a geography teacher who saved students' lives by closing a door as he was shot.

"It's chaos here and devastation," Rabbi Jonathan Kaplan of the local Temple Beth Chai told JTA on Wednesday on his way to console bereaved parents in his congregation "Everyone is just waiting and praying. No words can describe what happened here."

Jaime Guttenberg and her brother Jesse were students at Stoneman Douglas High School. While her brother managed to escape the school, Jaime was killed.

"My heart is broken. Yesterday, Jennifer Bloom Guttenberg and I lost our baby girl to a violent shooting at her school," her father, Fred Guttenberg, wrote on Facebook. "We lost our daughter and my son Jesse Guttenberg lost his sister. I am broken as I write this trying to figure out how my family gets through this."

Guttenberg and her brother were volunteers at The Friendship Initiative, a program that pairs neurotypical students like them with special needs kids. Another volunteer at the center, Gina Montalto, also was killed in the shooting.

Jeb Niewood, president of The Friendship Initiative, remembered Guttenberg as a genuine person who loved helping others.

"Jaime was quite an amazing human being, she had a maturity and compassion far beyond her years, she had an aura, a glow, that radiated from her smile and her eyes, she was beautiful in every way," Niewood told JTA.

Niewood said the Guttenberg family had faced tragedy just months earlier when her paternal uncle, a first responder, passed away from complications of an illness contracted during the 9/11 terrorist attacks in New York.

In her free time, Guttenberg also loved to dance, and she was involved with a local dance studio, according to Facebook posts.

"Her huge passion aside from helping people was dance, and [she was an] extremely dedicated and talented dancer," Niewood said. "She's the daughter that everyone wanted."

Guttenberg's cousin, Marc Pollack, said his family was reeling from her death.

"My heart is broken from the loss of this awesome young girl and the pain that our entire family is enduring," Pollack wrote in a Facebook post.

Alyssa Alhadeff was a mature, laid-back girl who loved soccer and made friends easily. She played midfield for the school soccer team, earning newspaper coverage for her achievements on the field.

Alhadeff had attended Camp Coleman in Georgia, a Reform Jewish camp, for one summer, and was planning on returning this year. Staff there remembered her as being "like an angel," always happy to help out and quick to adjust to a new environment.

"She was one of the easiest campers, very mature," said Lotem Eilon, Alhadeff's unit head. "She was very friendly and didn't have to deal with drama per se. Alyssa was very mature and friendly and fit into camp right away, even though she came in older."

Camp director Bobby Harris remembers Alhadeff as a sweet girl who was a pleasure for the counselors to supervise. Several of Coleman's campers go to Stoneman Douglas High School, and the camp will be hosting a service on Facebook Live Thursday evening in the victims' memory.

"She was a very sweet camper," Harris said. "Her counselors always said she did exactly what she was told to do, always helped out whenever she was needed to help out. She was like an angel. She was just a bright light and was very positive."

Meadow Pollack, a senior, had gone missing and was confirmed dead Thursday morning. In a photograph posted on Facebook, she is wearing a cap and gown in preparation for graduation. She planned to go to Lynn University in nearby Boca Raton next year.

A friend posted on Alex Schachter's facebook page that he was 14 years old and played the trombone in the school's marching band, which won a state title last year. He enjoyed playing basketball and was described as a "sweetheart." Alex's brother survived the shooting.

Scott Beigel was reported to have been shot as he shut the door to protect students from the gunman, an expelled student identified as Nikolas Cruz. One of the students in his class, Kelsey Friend, recounted how Beigel, 35, let her and other students into his classroom and then attempted to lock the door.

"I had talked to my teacher and said 'I am scared.' And then we all heard gunshots, and he unlocked the door and let us in. I had thought he was behind me, but he wasn't," Friend told ABC News. "When he opened the door, he had to relock it so we can stay safe, but he didn't get the chance to [stay safe]."

Friend said she would likely not be alive had Beigel not opened the door for her.

"I'm so thankful that he was there to help everybody who did live in that classroom because he was in the doorway and the door was still open and the shooter probably didn't know we were in there because Mr. Beigel was laying on the floor," she told ABC "If the shooter would have came into the room, I probably wouldn't be speaking with you right now."

"He would explain things easier to a lot of us in the classroom," she said. "It was just easier to comprehend the subject when he taught it."

Beigel was a staff member at Camp Starlight, a predominately Jewish summer camp in Starlight, Pennsylvania. In a Facebook post, the camp called him a "beloved friend and hero." 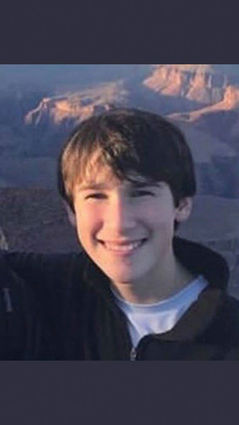 "[H]e was someone who could make you laugh in any situation and those kids were very lucky to have him as a teacher and protector," Liza Luxenberg, a friend from Camp Starlight, wrote to JTA. "I am not at all surprised to hear that he endangered his own life to save others. He has always been a hero to me as a friend and now unfortunately the rest of the world gets to learn of his heroism in this tragedy."

"Today is a really sad day as we learn about your passing Scott Beigel," Adam Schwartz, a Starlight camper, wrote in a post. "You were one of my favorite counselors growing up and my Olympics General my senior year. Those kids were incredibly lucky to have you, you are a real hero."

Melissa Strauss wrote: "A man with strength and wisdom has died, protecting his students during the school shooting in Florida yesterday. Scott Beigel was not only a teacher and a counselor but he was the biggest role model."