With theme of 'Together We Will,' BBYO convention sounds prescient note on teen action 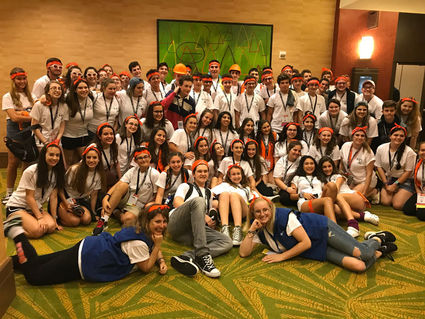 A group of North Florida teens posing together at the conference.

(JNS)-Mike Signer, who served as the mayor of Charlottesville, Va., during the rally and protests last August that brought white supremacists to the forefront of international attention, recalled that he was about 8 or 9 when he heard his first anti-Semitic slur.

"Growing up in Northern Virginia, the last thing I wanted to be was different, so I assimilated," he told more than 3,000 Jewish teens attending the annual BBYO International Convention held last week in Orlando, Fla.

It wasn't until his late 30s, when Signer made his first trip to Israel, that he said he became comfortable with his Judaism.

That wasn't the case for the Jewish teens who packed convention halls and meeting rooms during the four-day conference. Delegates traveled from 49 states and 36 countries, including from as far away as China, for the celebration of Jewish teen spirit, listening and learning from speakers in the worlds of entertainment, social justice and Jewish organizational life.

But before they got into the bulk of the program, a moment of silence was held in memory of the 17 people-14 students and three staff members-killed in the mass shooting at Marjory Stoneman Douglas High School in Parkland, Fla., some 200 miles south of Orlando, on Feb. 14, the first day of the conference.

Recognition of that loss continued throughout the next few days. Yet despite a lingering pall of sadness, a sense of excitement also prevailed.

"I love going back to connect with friends from all over the world; it is the only way we can all see each other in one place," said Lexi Sussman of Cleveland, who was attending her third convention.

In addition to Signer, speakers included Susan Bro, whose 32-year-old daughter, Heather Heyer, was killed when a car drove into the crowd of counter-protesters last summer in Charlottesville; two-time Olympic gold medalist Aly Raisman, who just a few weeks before the convention publicly confronted Larry Nassar, the USA Gymnastics physician convicted of sexually abusing her and hundreds of others young athletes; Jonathan Greenblatt, CEO of the Anti-Defamation League; and 31-year-old actor Josh Peck.

Throughout his remarks, Signer, who now sits on the Charlottesville City Council, implored the young people gathered to go into public life with "courage and confidence."

"Fringe elements are unacceptable," he said. The Jewish people can have a place in "healing the breaches and wounds of the world."

Wisconsin delegate Andrew Kazan agreed. "When you see how terrible hate is firsthand," he said, "you can see why we need to combat extremism and anti-Semitism."

Focusing on the event's theme, "Together We Will," Signer shared that BBYO teens would be part of the generation that takes leadership to the next step-something being exhibited in real time in the wake of the school shooting in South Florida. There, teens the same ages as the conference participants were becoming budding activists, trying to make sense of lethal attacks in America's schools (18 school shootings have occurred since Jan. 1).

'The force for change'

For her part, Bro is seeking a way to bring meaning and something positive from her daughter's death. The room was pin-drop quiet as Bro, too, embraced the convention's theme, asking participants to be the force of change that eradicates hate.

Bro described Heyer as an ordinary person, but one who was willing to stand up for what she believed. The crowd buzzed in support as Bro passed on a quote from her daughter: "If you are not outraged, you are not paying attention."

Asked where she finds the energy to carry on, Bro responded, "I have to make something out of her death. I can't just let it go. I am not allowing that." She also looked to the teens for help, saying "you have to be the force for change."

To that end, she invited the teens to speak with her, but with one caveat: "Tell me what difference you're making, so the world can be a better place."

Raisman, who received the BBYO "Stand UP" award, spoke of the importance of Judaism in her life. She noted "amazing memories of Jewish holidays," which were a time of bonding in her tight-knit family. "If you are not close to your family, surround yourself with people that support you," she said. "There's a lot of ups and downs in life, and it's important to have people you can go to for advice."

The native of Needham, Mass., also expressed concern about bullying on social media, including victim shaming, body-shaming and judging. "What you guys have to think about is no matter how many followers someone has, everyone has feelings. Always be kind to one another," she encouraged.

Alluding to the gymnastics sexual-assault scandal, Raisman acknowledged that "everyone is a survivor of something."

In a more intimate leadership question-and-answer session titled "It's a Woman's World," Raisman told BBYO delegate and moderator Gabrielle Gorowitz from the Gold Coast Region in Florida, that "if someone is suffering abuse, they need to tell someone, and then someone else, until someone finally listens."

'Kids are planning what they want'

Caryl Stern, president and CEO of UNICEF USA, described the audience as pieces of a puzzle who could make a difference. She invited the delegates to join her in helping kids in need fulfill their potential.

Speakers also included Jason Kander, president of Let America Vote and a former secretary of state in Missouri; singer Melanie Galiardo; and Zachary Pamboukas, a third-grader who was born with a partial arm. The 8-year-old received a "Spider-Man"-inspired limb from a 3-D printer created with the help of Israeli engineers and Limbitless Solutions, a nonprofit organization dedicated to providing children with affordable bionic limbs.

Zach's enthusiasm for his super-hero-like appendage drew both smiles and tears as he insisted, "I do everything everyone else can; I just do it in my own way."

Jonah Rubenanko from BBYO's Ohio Northern Region said Zach inspired him: "I'm studying 3-D modeling at school and someday hope to be part of these solutions."

Omer Bar-Lev, a member of the Israeli Knesset who founded Acharai ("Follow me"), which works to empower thousands of marginalized Israeli youth each year, told the gathering that "youth organizations are the key to success, to what we can do."

Self-acceptance, repairing the world and eradicating hate were all common convention themes, made more relevant by the presence of several Holocaust survivors, who addressed the group. In "Zikaron BaSalon: Survivor's Stories," more than 50 teens helped support a movement to bring Holocaust remembrance beyond a yearly commemoration and "into people's living rooms," as the project name imparts. Along those lines, when survivor Trudy Album told of her harrowing experiences during World War II in Hungary and Czechoslovakia, Ariana Rabinovich of Fort Collins, Colo., videoed the presentation to share with classmates for a school project. 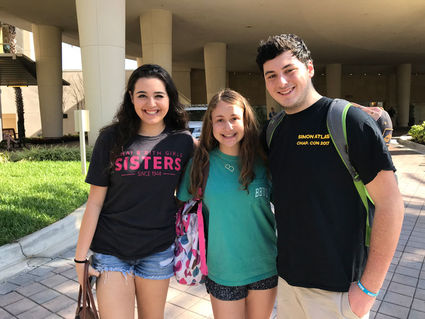 Pamela Ruben BBYO members with friends from across the country reunite at annual and summer programs. Lexi Sussman from Cleveland, Ohio, Jared Katon from Potomac, Maryland and Brooke Levitt from Central Florida carpool together to BBYO's International Convention in Orlando.

During a live session moderated by BBYO's Teen Press Corps, actor Peck-known to parents for Nickelodeon's "Drake and Josh," and to teens as a YouTube and social-media influencer-answered questions from Eva Hayman (Northern Region East, Northern Virginia) and Olivia Landsman (Gold Coast Region, Florida) about a variety of topics, including self-acceptance, and the rewards and challenges of growing up in the public eye. Asked what it was like having his awkward years chronicled on television, the actor quipped: "Kids going through the same stages can feel a little better knowing it's going to end up OK." (He then posed for pictures with more than 500 teen delegates.)

BBYO's CEO Matthew Grossman noted the convention was the largest of its kind, gaining 500 new delegates since the 2017 summit in Dallas and first-time delegates from Australia, China, Colombia, Mexico and Spain. He attributed the strong growth of the event to the organization being teen-led, coupled with its pluralistic environment.

"There's no need for focus groups when kids are planning exactly what they want," he said. "Teens are more than the center of conversation; they're running it."

Pamela Ruben is an author and freelance writer based in Orlando, Fla.