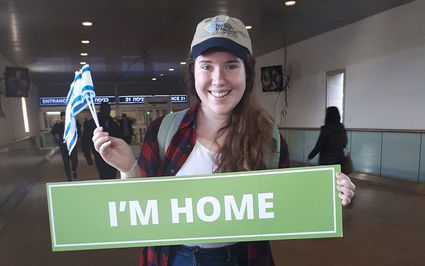 Nesya Lieberman, 20, made aliyah on Tuesday through the Nefesh B'Nefesh organization, in partnership with the Ministry of Aliyah and Integration, the Jewish Agency of Israel, Keren Kayemeth LeIsrael and the Jewish National Fund-USA.

Nesya, formerly of Atlanta, will join an ulpan, learning Hebrew at Kibbutz Sde Eliyahu before beginning a year of national service work.

"I've wanted to make aliyah ever since my eighth-grade school trip and am overjoyed to have finally accomplished that goal! Making aliyah alone is intimidating, but I truly believe that this is where I need to be," Nesya told Israel National News. "Jews have been praying for a return to Israel for millennia, and I'm fortunate enough to live in a time when such a return is possible. Why would I live anywhere else? Israel is my home, and I can't wait to see what my future here will bring."

The former Connecticut senator, who was in Israel just two weeks ago for an event titled "The First Israeli Congress on Judaism and Democracy," is an outspoken advocate for a strong relationship between the United States and Israel.