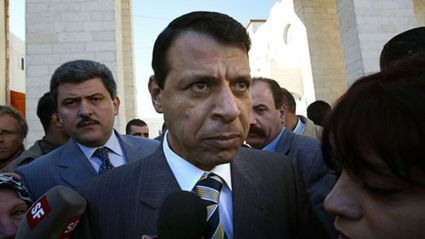 Former Palestinian Fatah Party lawmaker Mohammed Dahlan, who is viewed as a potential successor to Palestinian Authority leader Mahmoud Abbas, speaks to the media in December 2006.

The battle for the succession of Mahmoud Abbas in the Palestinian Authority is heating up. This was apparent from Fatah Secretary-General Jibril Rajoub's recent attack on Egypt, which supports the candidacy of Palestinian politician Muhammad Dahlan for the position of next PA chairman.

The Israeli security forces are concerned about a possible bloodbath in the West Bank as soon as Mahmoud Abbas leaves office.

The "bombshell" that Jibril Rajoub, secretary-general of Fatah in the West Bank, dropped during an interview on the BBC's Arabic service on February 17, 2018, is still reverberating throughout the Arab world and the territories.

During the interview, Jibril Rajoub attacked Egypt for supporting his bitter political rival Muhammad Dahlan. He said: "It is not acceptable for Egypt to support Muhammad Dahlan. He was expelled from the Fatah movement, and Egypt knows why. They were part of this process. It's not honorable for Egypt as a nation to support someone who is against the Palestinian problem and his own nation. We are talking about a wrongful precedent and step for Egypt."

Jibril Rajoub has a terrible relationship with Egypt. Last year, he was deported from Egypt shortly after he arrived in Cairo to take part in a political conference as a representative of Fatah. Soon after his plane touched down, Egyptian security officers put him on another plane and ordered him to leave the country because he had criticized the Egyptian president in the media.

According to Fatah sources, Jibril Rajoub suspects that PA Chairman Mahmoud Abbas will soon retire from political life. As Rajoub believes he is the most suitable candidate to succeed Abbas as chairman, he launched an attack on his rival Muhammad Dahlan. Dahlan has the backing of the Arab Quartet (Egypt, Saudi Arabia, Jordan, and the United Arab Emirates) for the position of the next chairman of the Palestinian Authority.

Unsurprisingly, the Hamas leadership is supporting Muhammad Dahlan. Khalil al-Hayya, a member of the Hamas political bureau, stated on Feb. 20, that, "Muhammad Dahlan is a major Palestinian figure. His stance is clear regarding reconciliation, and we thank him for his steadfastness for the Gaza Strip."

Muhammad Dahlan's supporters reacted derisively to Jibril Rajoub's remarks and said that he is "a crazy man like President Trump."

According to them, Rajoub is very concerned by the possibility of Dahlan becoming the next chairman of the Palestinian Authority. In the event of his ascension, Rajoub will have to either leave the area or take the risk of being put on trial and facing a long sentence in a Palestinian jail.

Dahlan's supporters claim that Rajoub is trying to market himself as the successor of Mahmoud Abbas and that he has allied himself with Qatar, the Muslim Brotherhood, and Israel against Egypt.

The US government opposes Dahlan

Jibril Rajoub is not the only one working against Muhammad Dahlan. In recent years, the United States has been working against him as his power continues to increase within the Arab world.

Dahlan sees himself as Yasser Arafat's true successor. Although he was expelled from the Fatah movement, he is patiently planning his comeback, straight into the position of chairman of the Palestinian Authority. For the past 11 years, the United States has refused to allow Muhammad Dahlan to enter its territory and considers him to be a destructive force against its policy on the Israeli-Palestinian conflict.

During a Quartet debate in Vienna in 2010, former U.S. Secretary of State John Kerry stated that Muhammad Dahlan is no less dangerous than Hamas and that Washington refused to allow him entry into the United States.1

In discussions held by the Trump administration on "the day after Mahmoud Abbas," attended by envoy Jason Greenblatt and Ambassador David Friedman, Arab sources stated that Muhammad Dahlan had saved the Hamas movement and he had persuaded the Egyptian government to open a dialogue with it.

Senior officials in the Trump administration have accused Dahlan of propagating statements calling for the annulment of the Oslo accords and declaring the territories "a state under occupation," which contravenes U.S. policy.

The American campaign against Muhammad Dahlan actually serves his purposes very well. For this reason, it is mentioned at length on any Internet site that supports him.