US ambassador warns against Jewish expulsion from Judea and Samaria 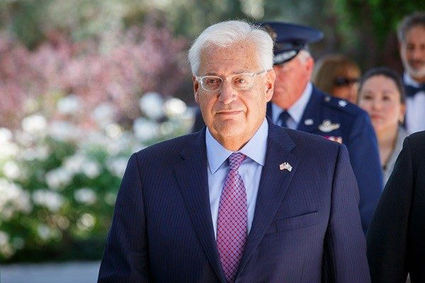 David Friedman, US ambassador to Israel

Privately and off the record, US Ambassador David Friedman gave a pessimistic assessment of issues surrounding a possible peace deal with the Palestinians to a group of officials from the Conference of Presidents of Major Jewish American Organizations, according to a Channel 10 News report Monday.

"We do not want to raise expectations about the chances of reaching a peace agreement too much. We are realistic. We want a peace agreement, but we know that this would not destroy Hezbollah or ISIS," he reportedly said, while adding, "In any case, we don't believe that threatening to pressure Israel is helpful."

He came down hard on the Palestinian Authority, according to a few attendees at the briefing, saying, "They have not shown that they are capable of building institutions that will allow them to live in peace with their neighbors."

But even if a deal was in the offing, he was not sanguine about the chances that Israeli society would survive intact, according to the report. The possibility of a mass refusal to follow orders to evict Jews from their homes "worries the Israeli government," he reportedly said. "The command echelon in the IDF is going more and more to the national religious [sector]. These are people who feel duty-bound to this land as land given to them by God," he added, saying it was his opinion that "the expulsion of hundreds of thousands of settlers could lead to a civil war in Israel."

On a less controversial note, Friedman said that he believed that the American embassy would be moved to Jerusalem by the end of 2019, "at the latest."

Both his interlocutors at the meeting and US embassy representatives pushed back against the remarks attributed to Ambassador Friedman.

Conference of Presidents Chairman Stephen M. Greenberg and CEO Malcolm Hoenlein said in a statement following Monday's report, "We have seen the reports on the off-the-record address held with Ambassador David Friedman. The words attributed to him were taken out of context, are incomplete, and are therefore a distortion of the ambassador's remarks."

A U.S. Embassy spokesperson said, "The Channel 10 report is based upon three attendees at the conference who failed to provide much of the context behind Ambassador Friedman's comments as well as significant additional and related remarks by the Ambassador... As for settlements, the Ambassador believes that unrestrained settlement growth is not helpful for peace."

Friedman, however, is known for his staunchly pro-Israel, pro-settlement stance, having been the president of the American fund-raising arm for the Yeshiva of Beit El in Judea. It was also reported last year that he asked the State Department to stop using the term "occupation" when describing Israel's presence in Judea, Samaria, and eastern Jerusalem.