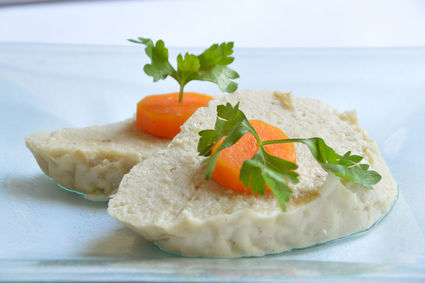 Gefilte fish is an easy find at Passover.

(Kveller via JTA)-When I see the giant gefilte fish and matzah display at Costco in late February, it sends me into a panic. I think, is it time for gefilte fish already? I think that finding the holiday foods, including that gigantic jar of gefilte fish, is not easy and maybe I should stockpile now. I start thinking about how many people I'm having for Passover-a lot or a little? One manageable table or an impossible four?

Most of the year I'm a pretty normal American woman. I look normal. I dress in a fairly normal manner. I walk in grocery stores and have a vaguely normal shopping list. Yes, there are certain Jewish holidays here and there where I'm maybe shopping for 20-pound bags of potatoes in the winter, apples and honey, round challahs and smoked fish in the fall, or poppy filling in March. All a little odd.

But then there's Passover.

Costco, of course, can only satisfy a few needs for this holiday. Though I'm willing to bounce back and forth between its kosher smoked fish case and the Passover display, both forming a miniature Pale of Settlement in the store for Jewish shoppers to cling to, eventually I must venture out to the Jewish section of the regular grocery stores, to their Pesach tables, and to the kosher stores to get everything else I need.

I need horseradish-red and white. I need fish and potatoes, matzah and parsley. Coconut and carrots. Apples and walnuts and honey and wine. Oh, and they wouldn't happen to have four shankbones hanging around, would they? One time when my mother was alive, she had a craving for real kishke. I went to the store with her instructions: I needed rendered fat and casings. The butcher seemed mystified.

How did I become my mother? Or, rather, my grandmother, great-grandmother and great-great-grandmother, all the way down the line? How did I get so fascinated with the butchers at all the grocery stores in town, interrogating the staff about their briskets, their chicken livers, the weights and when they're expected?

When I've bought everything on my list, I start cooking very meticulously. I cling to the idea that if I'm organized about this, I can be ready. I can't really be ready.

Sometimes while I'm out shopping, I run into the rest of the world. There they are, happy normal people, out shopping for regular groceries, like bread, or in the Easter aisle buying chocolate eggs, squishy Peeps and giant chocolate Easter bunnies. I'm somewhat surprised that the world is just ticking along as normal, and there's not an emergency in their kitchens like there is in mine. Because no matter how far ahead I start, no matter how much I'm sure I'm finished the night before, it never fails that two hours before the seder I have to call my sister for emergency backup, for parsley sprig placement or peeling boiled eggs.

Back at the store, I find the last thing on my list, horseradish root for the seder plate-a gnarled, primitive-looking thing that I grasp in my matching gnarled hand-and I head home.