Shmura matzah for Passover: The real reason it's so expensive 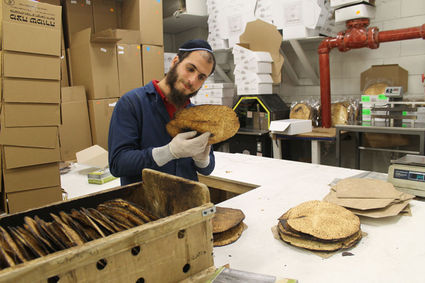 Every shmura matzah is inspected for quality and adherence to kosher standards before it is boxed.

NEW YORK (JTA)-It costs more per pound than filet mignon. It might be burnt or taste like cardboard. It's so delicate it often breaks in the box, rendering it unfit for Passover ritual use.

Yet every year, Jews from Brooklyn to Bnei Brak line up to fork over their hard-earned money to buy boxes and boxes of the stuff.

This isn't your regular box of Streit's matzah. We're talking, of course, about handmade shmura matzah: the artisanal, disc-shaped matzahs considered extra special because the ingredients are "guarded" against leavening, or chametz, not just from the time the wheat is ground into flour, but from before the wheat is even harvested. "Shmura" is Hebrew for guarded.

The extra level of scrutiny-and the labor-intensive process required to make handcrafted matzah-is largely what accounts for its high price: anywhere from $20 to $60 for a single pound.

"The amount of hours of labor going into this between me and my staff is incomparable," said Yisroel Bass, who runs a farm in Goshen, New York, that produces organically grown shmura matzah ($34 per pound for regular shmura, $37 for spelt).

"Renting out a bakery costs a lot of money-the space and the staff. Equipment breaks every year. Every farm has its expenses, and organic farms end up having more overhead. We can't buy the synthetic fertilizer; we have manure," Bass told JTA. "And God forbid I have a bad year and the rabbi comes and says the wheat is no good, I just spent a whole lot of time and money on a product nobody wants. The cost has to reflect that."

Despite its price-and, some say, its taste-there's a thriving market for handmade shmura matzah (there's also machine-made shmura, which is cheaper and usually square but more strictly scrutinized than regular matzah). Many observant Jews won't use anything other than handmade shmura matzah on their seder table. Some won't eat non-shmura anytime during Passover. The same Jews who light expensive olive oil menorahs on Hanukkah rather than wax candles or buy premium etrogs for Sukkot will lay out extra cash before Passover to buy handmade shmura matzah. (The practice of going above and beyond is known as "hiddur mitzvah," beautifying the commandment.)

"For the consumer, it is an opportunity to purchase the only sacred food that we have today in our faith," said Rabbi Shmuel Herzfeld of Ohev Sholom synagogue in Washington, D.C. "It is a bargain. Buy less brisket and more shmura matzah."

"There is just a sense of authenticity about having shmura matzah on the table," Weitzman said. "It's a feeling more than anything else-certainly more than serving up Passover-style Fruit Loops the next morning."

Others say they like the taste and eat it year round, stocking up right after Passover when the price drops dramatically owing to reduced demand.

"I keep a box of shmura matzah in the trunk of my car," said Tali Aronsky, a public relations doyenne who lives in Israel. "Keeps crispy in all weather and great in a pinch."

Religious Jews consider shmura matzah baked after midday on the day before Passover-known as "matzot mizvah"-as especially meritorious to eat, and the matzah is priced accordingly. At the Satmar Bakery in the Williamsburg section of Brooklyn, a pound of the Passover eve-baked stuff retails for $60. The line of customers at the Rutledge Street store usually snakes around the block.

The Satmar Bakery employs a number of stringencies rare even in the world of shmura matzah. It harvests its wheat in Arizona, where the dry climate helps guard against accidental leavening (moisture precipitates leavening).

Matzah farmers in the Northeast typically harvest their wheat crop in May or June-around the Shavuot holiday (also called Hag Habikurim, which means Festival of the First Fruits). The wheat is plucked after the kernels start to harden but before they sprout new shoots. Kosher supervisors monitor the grain even as it's growing to make sure the wheat isn't sprouting.

From the time it is picked until being milled months later, the wheat must be guarded and stored in a climate-controlled environment. Too moist, it could become chametz. Too dry, it will fail to bake properly. At the Yiddish Farm in upstate New York, Bass says he uses fans and computer monitoring to bring the moisture level down to the desired 11-12 percent level.

After the wheat is milled into flour-also under close supervision-the baking process may begin.