Stump the seder guests: A mystery for each day of the holiday 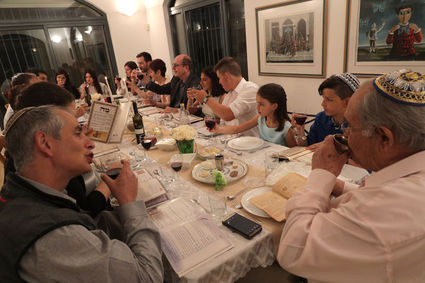 An Israeli family joins in the Passover seder last year on the first night of the Jewish holiday in Tzur Hadassah.

(JNS)-Why is this year going to be different from all other years? Because this year, you can stump your guests with the meaning behind many of the mysterious rites that comprise the Passover seder.

Let's face it, you finally wrap up those frenzied days of cleaning and cooking. And then your guests arrive (Passover is an even bigger family reunion than Rosh Hashanah, the Jewish New Year), and by the time you pass out the Haggadahs and the seder actually begins, you often slog through it on autopilot.

Passover is celebrated for eight days outside of Israel, with two seders held on the first and second nights of the holiday. Israelis celebrate for seven days and hold just one seder the first night. This year, Passover begins after sundown on the 15th day of the Jewish month of Nisan, correlating to Friday, March 30, which is also Shabbat.

But Pesach or Passover in English, which refers to G-d "passing over" the households of the Hebrews in Egypt during that deadly 10th plague or killing of the first-born, has its fair share of mind-boggling traditions. Here are eight customs, one for each day of the holiday:

• The Burning of the Chametz. It's not enough to trash the chametz (leavened food). We are commanded to actually burn it in a formal bi'ur ceremony the morning before the first seder (having searched for it the evening before with a candle and feather). We learn that chametz represents our haughtiness, and setting it aflame is a dramatic way of excising that puffed-up part of us, which we replace with a humble matzah," said Rabbi Ron Fish. "But the truth is, by then we've finished with all the exhausting preparations and are feeling pretty joyous." At some synagogues, including Temple Israel in Sharon, Mass., where Fish serves as senior rabbi, the tradition is to burn the chametz with last year's Sukkot lulavs, which keep the fire burning bright.

• Reclining on Pillows. The Gemara teaches us to lie back on pillows at the seder, a reminder that we have been freed from slavery. "I love it most when we recline to eat that first taste of the matzah," said Rabbi Avraham Sutton, an author and meditation teacher based in Kiryat Ye'arim (also known as Telz-Stone), Israel. We wait for this moment the whole night. Holding my matzah in my right hand, I close my eyes, and chew slowly and consciously."

• Seder Plate. Bitter herbs? A burnt egg? Ground-up apples and nuts? A bone? Not your typical meal. But each of the foods on the seder plate teaches us something. Shira Smiles, an author who teaches Torah around Jerusalem, credits Rav Pincus with the thought that the six items on the seder plate-shank bone, egg, bitter herbs, karpas (green vegetable), charoset (made of nuts, apples, wine and cinnamon) and chazeret (often romaine)-correspond to six qualities, from compassion to accepting our own pain, needed for growth. "Pesach enables us to have a deeper understanding that it is only with challenges that we can become who [G-d] envisions us to be," she said. "The seder plate is a visual aid of how we need to emulate [G-d] and develop more kindness, set boundaries, and appreciate the beauty in the struggles of life."

• Hillel Sandwich. After what seems like an eternity, we nibble some matzah and then build an ancient sandwich-a tradition traced to the first-century sage Hillel, who no doubt included the Pascal lamb (korban or "sacrifice") in his version. "But in our post-Temple times, we are left with the bitter herbs and matzah with a little charoset," said Rabbi Shneur Zalman Bendet, co-director of Chabad of Greater St. Paul in Minnesota. "Matzah represents the ability to break free from our shackles, the bitter herbs represent suffering, and charoset symbolizes the cement-the elbow grease it takes to serve G-d," he said.

• The Four Cups. Each cup of wine is designed not to increase inebriation, but to serve as signposts along the seder journey. The number four is a motif throughout, according to Rabbi Elan Adler, formerly of Baltimore and now teaching Torah in Jerusalem and the nearby neighborhood of Ma'ale Adumim. One of the lesser-known fours comes from Exodus 6:6-8, where G-d promises four things: "I will take you out, I will rescue you, I will redeem you, and I will take you as my nation." Adler said "as we bless each cup, we thank G-d for actualizing each of His words with such majesty, letting us know that freedom is a process which doesn't happen overnight."

• The Four Questions. Known as a way to get the kids to inquire about the dramatic story of G-d's rescue of the Israelites from Egyptian slavery, they remind Rabbanit Y. Sara Cohen, a teacher in Brooklyn, N.Y., and on Torahanytime.com, of a story. When her community was hit with several tragedies, a young man asked: "Rabbi, what's going on here? These young children, the parents... how could this have happened to such innocent people?" The rabbi replied: "Bring me a Pesach Haggadah." He opened it up and handed it to the young man, who replied that "these are the four questions." The rabbi responded: "Exactly! In Judaism, we're allowed to ask four questions: why we lean, why we eat bitter herbs, why we're dipping and why we're eating matzah-these are in the Haggadah. But yours is the fifth question, and some questions have to be stored away in the realm of emunah (faith)."

• Opening the door for Elijah. Hopefully, some of your guests will remain awake long enough to welcome the prophet before the drinking of the fourth cup of wine. The prayer that begins, "Pour out Your fury on the nations," from the 79th psalm and the welcoming of Elijah the Prophet are traced to post-Crusades 12th-century France, a time of danger for the Ashkenazi world. So said Ruth Langer, professor of Jewish studies and associate director of the Center for Christian-Jewish Learning at Boston College. "The prayer reminds us that it's G-d, and not us, who takes vengeance on our enemies," adds Langer. "There is excitement and hope in opening the door for Elijah, showing our faith that G-d the redeemer is also our protector." 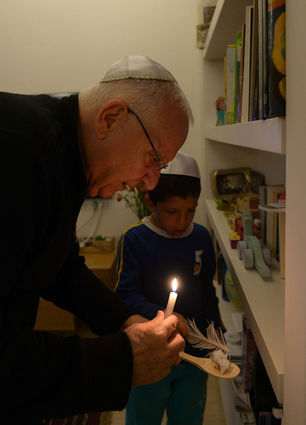 President Reuven Rivlin with his grandson, looking with a candle for any sign of chametz as he prepares for the Jewish holiday of Passover (April 2, 2015).

• The Afikoman. Half a matzah broken early in the seder, the afikoman is divvied up and served as the very last thing eaten of the night. Over the generations, this humble bit of matzah has often gained star status as an "evil eye" deterrent or a segula ("charm") for long life. In some families, the children steal and hide the afikoman, and the leader must find (or buy back) the prized possession, without which no Passover seder can be complete. In other homes, the leader hides the afikoman. That's the way Daniel Dressin's family operates, and the 10-year-old from Owings Mills, Md., is gearing up for some successful negotiating this year. "It's fun competing against my brothers and cousins to try to find it," said Daniel, who when asked why it's hidden, suggests that "maybe it's like Moses was hidden when he was a baby." His mother, Rachel, had a more practical explanation: "It keeps the kids awake. And it definitely keeps them entertained."

By the way, here is a bonus question for your guests: What exactly is that mysterious (and expensive!) round, crisp shmurah matzah?

It is matzah monitored ("guarded") throughout the entire making and baking process by an observant Jew (and not a machine) to ensure that no leavening transpires.

Celebrity Jewish cookbook author Joan Nathan weighed in: "These so-called 'watched' matzo that we can buy today, round or oval-shaped, plus matzo meal made from these matzos with a kind of wooden mortar and pestle, used to be all matzo before the Age of Industrialization, when Manischewitz created a machine-made square matzo in the [United] States and earlier in France. Before, Passover people would go to a matzo oven, either in the synagogue or the community. And wealthy homeowners even had their own matzo ovens!"