'The Shape of Water' through a Jewish Lens 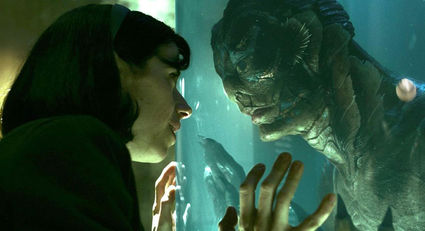 Elisa meets the sea creature for the first time.

There are no Jewish characters in the cinematically and thematically beautiful 2018 Academy Awards best picture winner "The Shape of Water." However, out of all nine nominees, this Guillermo del Toro masterwork best speaks to the Jewish experience: empathy for others, defense of what is right-even if not politically expedient-and remaining true to core principles of our religion. There even are some striking Jewish historical parallels in this adult "fairy tale for troubled times" set in 1962, in which society's outsiders go against seemingly insurmountable odds to save the ultimate outsider. Protagonist Elisa Esposito, stunningly portrayed by actress Sally Hawkins in a mute role, pleads in sign language to her neighbor Giles in a seminal moment: "If we do nothing, neither are we."

Reaching out to others who are in need has long been a bedrock principle of the Jewish people. Dating back to biblical times, the Hebrews were conscious of sharing food and other resources at the time of the Exodus from Egypt, and subsequently welcomed strangers into their dwellings (Sukkot). Immigrants have played a major role in the miraculous formation (and transformation) of the modern State of Israel; I have personally seen challenges of immigrants in Beer Sheva, and although there remain barriers to successful assimilation of Ethiopians and Russians, such efforts have made the Jewish state (and our people) stronger. Of course, the empathy of others has also allowed our people to survive all too many dark chapters in history. Del Toro gets that in referencing the power of human love of "the other."

In interviews during the successful film festival season, the fantasy movie writer and director also drew reference to our society's rejection and dehumanization of those who don't look or politically think like us. He and now many others see "The Shape of Water" as an elixir to fight the cynicism and hate seen on the extremes that has become all-too-fashionable. Not surprisingly, some cynics who are close-minded to a story that emits a sense of love of others have dismissed this film as "sappy," speaking to one of the unfortunate realities of our time.

Historically, we have been most successful and fulfilled when allowed to just be ourselves by embracing Judaism and Jewish culture-instead of staying between the lines of coloring-book societies. Neighbor Giles, a commercial artist, lives in a time in which his best way to muddle through in society as a gay man is to be closeted. Before we learn of the luncheonette manager's discrimination against blacks and gays we discover his tendencies to change his manner of speaking in order to appear to fit in. It's ironic to see who are most miserable in the film-and in our world. Similarly, the primary antagonist, Strickland, buys the teal Cadillac as an outward display of success, and we are visually pelted with images on the highway of this ideal stereotypical definition of a perfect life.

Meanwhile, Elisa and black co-worker Zelda are outsiders who remain true to themselves. Their actions, taken together with Giles (and with the assistance of the Russian conscientious objector Dmitry, also an outcast) results in their ability to save a precious life-and themselves in the process. History has shown us that during times in which Jews have chosen (or were forced) to remain silent or even convert, both the Jewish people and society at large have suffered. In Israel and the US, where Jews can remain true to their core principles and culture, we have become a light unto other nations.

In addition to the various technical and artistic nods to classic films, biblical references in "The Shape of Water" make welcomed appearances: from the directly-referenced story of Samson and Delilah to the less obvious Book of Ruth, which was the film playing in the theater below Elisa's apartment. Fittingly, Ruth was a poor widow and outsider with few outward attributes. She was committed to be there for her mother-in-law, Naomi, while adopting faith in the G-d of Israel. Elisa is, in a sense Ruth, while Giles and Zelda socially and ethically also possess "Ruthian" characteristics.

Even Jewish symbolism was peppered throughout this landmark film. The concept of the ritual bath (mikvah) was emulated in the form of the various water scenes ranging from bathtubs to water tanks to the stunning climax. While the egg offering between Elisa and the "creature" is obviously a reference to fertility, in Judaism (and biology) it represents the potential to become an independently living and breathing entity. The egg in the seder plate represents the Jews at the time of the Exodus from Egypt-potential "life" of a people.

Water, itself, forms the shape of the container. Judaism is changing and evolving, depending on the vessel carried. Our goal as Jews is to mold that vessel so that future generations can carry the substrate of life itself in a way that can also shape humanity for the greater good.