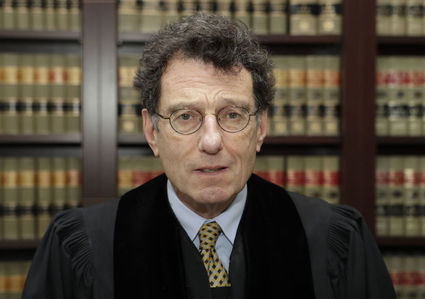 (Cleveland Jewish News via JNS)-Judge Dan Aaron Polster of the Northern District of Ohio is presiding over a case involving more than 400 federal lawsuits brought by communities around the country against drug companies and pharmacy chains for their role in perpetuating the opioid epidemic.

The case and Polster-a member of Congregation Shaarey Tikvah in Beachwood, and Park Synagogue in Cleveland Heights and Pepper Pike-were covered in a March 6 front-page story in The New York Times It discussed Polster's urging of lawyers to settle the case in a way that will provide meaningful solutions to the crisis, rather than focusing on a trial and "finger-pointing," and how that stance has caused an uproar in the legal community.

"I don't think anyone in the country is interested in a whole lot of finger-pointing at this point, and I'm not either," Polster said, according to a Jan. 9 legal transcript of the first hearing. "People aren't interested in depositions, and discovery and trials."

Polster told the Cleveland Jewish News that his view of the world through a Jewish lens-and the Jewish obligation to help others-has conditioned him to try to make an impact and affects how he goes about his work.

"I take our obligation of tikkun olam [often defined as the 'repair of the world'] very seriously," he said, adding that what he said at that first hearing best reflected how those intentions of helping others may apply to these lawsuits.

"I requested that everyone try and work together to come up with some steps that we can take this year, in 2018, to begin to abate the crisis because we are losing 50,000 people or more a year," he said.

The transcript read: "With all of these smart people here and their clients, I'm confident we can do something to dramatically reduce the number of opioids that are being disseminated, manufactured and distributed. Just dramatically reduce the quantity, and make sure that the pills that are manufactured and distributed go to the right people and no one else, and that there be an effective system in place to monitor the delivery and distribution, and if there's a problem, to immediately address it and to make sure that those pills are prescribed only when there's an appropriate diagnosis, and that we get some amount of money to the government agencies for treatment."

The lawsuits allege that drugmakers used deceptive marketing to push the sale of opioids and targeted vulnerable populations, such as the elderly and veterans, despite knowing that the drugs are addictive. They are also accused of negligent product oversight and ignoring suspicious, large orders of the drugs, according to the Associated Press.

On March 6, the city of Cleveland was added to the list of cities filing lawsuits against drug manufacturers and distributors, including other Ohio cities, the state and Cuyahoga County.

The city and county have been disproportionately affected by the opioid epidemic. According to Dec. 31, 2017 data projections from the Cuyahoga County Medical Examiner, 822 people died last year from drug overdoses. Of those deaths, 522 died from heroin, fentanyl or a combination of both. For context, the county saw 666 overdose deaths in 2016 and 370 drug deaths in 2015, according to the medical examiner.

By filing lawsuits, the city and county aim to acquire financial reparations for the costs the city has faced due to the epidemic.

Drugmakers targeted in the lawsuits include Allergan, Johnson & Johnson and Purdue Pharma, in addition to three large drug-distribution companies, Amerisource Bergen, Cardinal Health and McKesson. Drug distributors and manufacturers named in the lawsuits have said they don't believe litigation is the answer but have pledged to help solve the crisis, the A.P. reported.

The Times article said Polster was chosen by a judicial panel to hear the case based on Ohio being hard-hit by the crisis, its central location to defendants and his experience with multidistrict litigation, or consolidation of many similar cases.

Polster told the Cleveland Jewish News that the Times reporter, Jan Hoffman, shadowed him while he tutored a third-grader through the Jewish Federation of Cleveland's Public Education Initiative, among other legal engagements he had that day. He said she "got a pretty accurate picture of me, my strengths and weaknesses."

Most recently, Polster and the lawyers involved in the case met March 7 in a closed meeting. According to court documents, "the parties reported important and substantial progress on several fronts, but also identified barriers to a global resolution."

"Everyone," insisted Polster on the matter at hand, "is working hard."