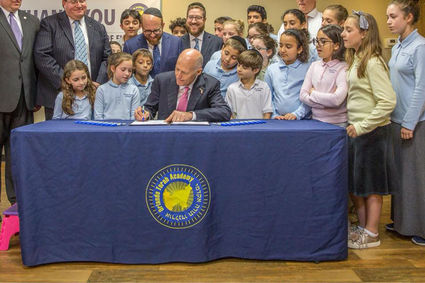 Gov. Rick Scott signs HB 545 with Orlando Torah Academy students and staff surrounding him. As in bill-signing ceremonies, he handed students the pens he was using to sign the bill.

When Gov. Rick Scott arrived at the Orlando Torah Academy last week, he leaned down and asked every child their name. Scott wasn't there just to meet the children, he came with a two-fold purpose. The school was the backdrop for a legislation signing ceremony of HB 545, the "scrutinized-companies" bill, which prevents companies that boycott Israel from bidding on local or state government contracts.

"This bill shows the world that Florida will not do business with those that boycott Israel," Scott explained as he signed the bill with dozens of OTA students gathered around him. "This bill sends a message to companies across the world that anti-Semitism has no place in our state or in our country. By signing this bill, we are assuring that Florida will not support those that participate in this intolerant movement."

Scott then announced the $2 million in security funding that will be in the 2018-2019 budget for nonpublic schools, including the 30 Jewish day schools in Florida.

Last October, Gov. Scott came to the Jewish Academy of Orlando to announce his proposal of $1 million to provide extra security to Jewish day schools throughout Florida. This $2 million is in addition to that previous provision.

Scott summed up his visit with, "We need to stand with Israel. That's step one. Step two is we should not be doing business with those who are boycotting Israel. That's wrong. And step three is, we've got to keep these schools safe."

In attendance with Scott at OTA were state Reps. Randy Fine of Palm Bay, Bobby Olszewski of Winter Garden and Mike Miller of Winter Park.