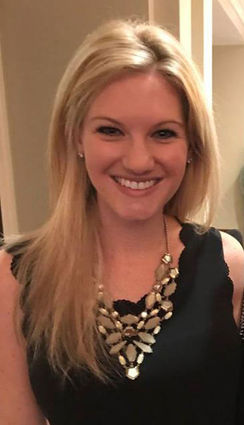 It is often said that enthusiasm can be contagious. It is the enthusiasm exemplified by volunteer Carina Gerscovich that has been contagious, and, likewise, successful with furthering the work of The Jewish Pavilion. To commemorate her generous donation of time and resources, The Jewish Pavilion has named Gerscovich as the official honoree for the 2018 Elayne Burke Wershil Fashion Show.

Gerscovich initially became involved with the Jewish Pavilion two years ago. A lunch meeting with Nancy Ludin, CEO of the Jewish Pavilion, led to Gerscovich's participation as a volunteer with the Pavilion. Soon after, she was asked to be a member of the organization's Friends Board, a group that leads the Pavilion's multiple annual fundraising events. It was a strategic networking connection made by Gerscovich with the Citrus Club that proved to be the most impactful for the Pavilion.

Each month, the Citrus Club's Leadership Alliance board hosts "United For a Purpose," a networking event that spotlights one local nonprofit. During the event, the Club provides space in a spectacular downtown venue featuring sunset and city views, a selection of delicious hors d'oeuvres and a cocktail to attendees for the pre-event purchase price of $10 to Citrus Club members, $15 to nonmembers. Tickets purchased at the door the night of the event cost $20. The spotlighted nonprofit does not pay for the event and 100 percent of the evening's proceeds are contributed back to the organization. The event gives Citrus Club members the chance to learn about important, local nonprofits, while the participating organization has the opportunity to increase both donations and volunteer efforts through networking.

As a then-member of the Citrus Club's Leadership Alliance and an ongoing supporter of The Jewish Pavilion, Gerscovich spearheaded a connection that allowed one of last year's events to benefit The Jewish Pavilion. That evening's event resulted in record attendance for the Citrus Club (200 compared to the next closest of about 110), over $5000 raised for the Pavilion, and an unheard-of invite for the organization to return for another "United For a Purpose" event this year.

Commenting that it was a team effort of leadership within the Pavilion and board members to facilitate that record attendance Gerscovich said, "It was great to be able to introduce the organization to so many people."

The success of the Citrus Club event led Jewish Pavilion Board Chairman Paul Stenzler to appoint Gerscovich to the organization's board of directors.

"We are thrilled to honor Carina Gerscovich", said Ludin. "She single-handedly organized a fantastic fundraising event at the Citrus Club last year and did such a great job that they invited the Jewish Pavilion to return this year on April 16th. We are so excited that she will chair 'United For a Purpose' again this year."

Gerscovich is the daughter of Dr. Eugenio and Katherine Gerscovich. A graduate of Trinity Preparatory School and the College of Charleston, she has worked in the finance industry for the past seven years and is currently employed by Merrill Lynch.

Gerscovich said that she became involved with The Jewish Pavilion because it connected her back to her 104-year-old grandmother, who currently resides in Buenos Aires, Argentina. "It really made me think about my grandmother and if she was able to have something in Argentina like The Jewish Pavilion, it would be such a nice addition," said Gerscovich.

"At the first volunteer event, I assumed my role would be to sit and visit with some of the elderly residents. It wasn't until I actually did it that it made an impact," said Gerscovich. "It's not as simple as we're just going to sit there and give them someone to listen to them for an hour or bring them a meal. For some of these people, we really are their only source of interaction other than the people that work there or live there."

She recalled a meaningful moment at one of the program visitations.

"We were all singing songs and I kept watching this one woman-she was not singing, she was not smiling. She was just sitting there in her wheelchair with her head down," said Gerscovich. "We started singing this one song that was an era piece, something from her time. All of a sudden, her head popped up and she started singing the entire song, word for word. She was just beaming from ear to ear. It was that moment that the impact of what we were doing hit me. She was brought back to some type of memory, something that happened to her however long ago that put this huge smile back on her face."

Speaking of the honor at the Fashion Show, Gerscovich added, "It does mean a lot. And I am very appreciative for it."

The Elayne Burke Wershil Memorial Fashion Show takes place Thursday, April 12, at 10:45 a.m. The event will be held at the Mall of Millenia, inside Bloomingdale's on Level 2. Ticket prices range from $25-$500 and can be purchased online at JewishPavilion.org.