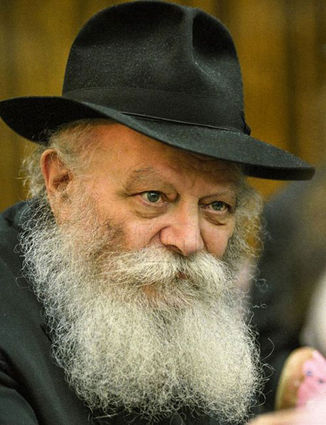 JNS is proud to partner with the Embassy of Israel in Washington, D.C., to celebrate 70 of the greatest American contributors to the U.S.-Israel relationship in the 70 days leading up to the State of Israel's 70th anniversary.

(JNS)-Rabbi Menachem Mendel Schneerson was without question a great Jewish figure, and one of the greatest Jewish leaders of the 20th century.

A talented and charismatic scholar, he was known across the world as simply "The Rebbe." As the seventh Rebbe of the Chabad-Lubavitch sect of Chassidism, he exponentially increased the movement's influence and size. In an unprecedented flurry of Jewish outreach campaigns, he sent emissaries around the world, establishing thousands of Chabad centers in cities, remote locales and on college campuses that continue to serve the spiritual and physical needs of Jews of all backgrounds.

Even in an era before the Internet, the Rebbe had a global reach, with followers all over the world. In addition to guiding his own immediate flock of Lubavitcher Chassidim, he expressed great concerns for the status of global Jewry. As such, he took a special interest in the success and welfare of the State of Israel. Given his myriad of lectures and writings about Israel, many are surprised to discover that the Rebbe never personally visited the country. Nevertheless, Israeli leaders of all stripes continually sought out his advice and blessing.

Many of these moments were captured on camera and can today be viewed online. For example, in one recording from 1988, Benjamin Netanyahu approaches the Rebbe for a blessing, and the Rebbe offers him a fascinating combination of religious guidance, along with practical political opinions and insight. Similarly, when Ariel Sharon was considering retiring from the military, he consulted with the Rebbe, who convinced him to remain as one of Israel's top generals.

Rabbi Schneerson often faced disdain and derision from "mainstream" haredi Judaism for stubbornly continuing to praise Israel and its military, and pray for its continued success. Many major rabbinic figures of the haredi establishment tended to negatively view any aspect of Israel connected to its mostly secular government (more so in the early years than today). In response, the Rebbe occasionally suggested that God acts through the courageous soldiers of the Israel Defense Forces, as in the case of the 1967 Six-Day War and "Operation Entebbe" in July 1976.

Through his steadfast leadership, the Rebbe steered the Chabad movement into embracing a pro-Israel attitude, writing to David Ben-Gurion "that Eretz Israel in all aspects, both present and future, should constitute a factor uniting Jews everywhere, both Orthodox and non-Orthodox of all trends."

Not surprisingly, many of his emissaries are among the most fervent supporters of Israel in their communities. The Rebbe continues to serve as a light of inspiration for Jews around the world, with his heartfelt dedication to Israel remembered and cherished by all who encounter his teachings.