At Mar-a-Lago, Christians and Jews celebrate Israel, unity and a strong partnership 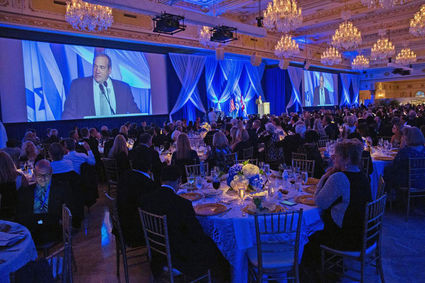 More than 500 evangelical Christians and Jews from across North America gathered at Mar-a-Lago on March 25 for the "Together in Fellowship" gala.

(JNS)-As many as 500 evangelical Christians and Jews from around the world gathered on March 25 at U.S. President Donald Trump's Mar-a-Lago resort in Palm Beach, Fla.-otherwise known as the "Winter White House"-for a one-of-a-kind event celebrating Israel's upcoming 70th anniversary, as well as the unity of Christians and Jews supporting the Jewish state.

Hosted by the International Fellowship of Christians and Jews (also known as "The Fellowship"), the "Together In Fellowship" gala raised $1.67 million that will be put toward two causes: a new educational campaign for the next generation of Christians and Jews to help deepen their bonds with Israel and the Jewish people; and helping elderly Holocaust survivors living in poverty by providing them with food, medicine, heating fuel and personal visits they desperately need in their final years. The latter is already one of the more than 400 global initiatives undertaken by The Fellowship.

"It's a great honor to have everybody at Mar-a-Lago, a special place for a special group of people," Trump told the gathering in a video message recorded shortly before the gala. The president left his weekend retreat several hours before the start of the event to head back to Washington, D.C. "I wanted to be there so badly. I had to leave-we have some pretty big things going on with our country, but our country is doing really well. Your taxes are down, your regulations are down, a lot of good things are happening, we're appointing a lot of fantastic federal judges, and I think you are all very happy with the results. So I'll see you next time. I hope you have a fantastic evening."

Guests hailed from throughout the United States, Canada, Israel, the Netherlands, Jamaica and Brazil. Half were Christian, half were Jewish. The evening began with a VIP poolside reception, with hors d'oeuvres and drinks, followed by a general sit-down reception and three-course meal inside Mar-a-Lago's exquisite ballroom.

The Fellowship's founder and president, Rabbi Yechiel Eckstein, started off the evening speaking about the gala's distinctiveness. He told the crowd: "Tonight is the first time I believe in history where Christians together with Jews are celebrating the 70th anniversary of the state of Israel. It's not Christians inviting Jews and Jews inviting Christians; it's Christians and Jews, and that is the theme for us tonight... there were those who were dubious, there was those who said no it cannot be done, and here we are together."

Eckstein also talked about the organization's new headquarters, "The Fellowship House," which will be, as he said, a "home away from home" for the 1.5 million Christians who visit Israel each year. The rabbi said it will be located "right next door" to the new U.S. embassy in Jerusalem-an announcement that drew loud applause from the crowd. He noted that Israeli American billionaire Haim Saban is one of the Fellowship's "greatest supporters," who has contributed $1 million toward the new headquarters.

The decision to hold the event at Trump's South Florida property was likely a strategic decision by Eckstein. His organization draws heavily from support by evangelical Christians, who also overwhelmingly support Trump and have applauded his policies towards Israel, such as his recognition of Jerusalem as its capital. It also comes as last year many charities and other organized canceled event plans at Mar-a-Lago following Trump's controversial remarks after a white-supremacist rally that turned violent in Charlottesville, Va.

'A new era where Israel wins'

Israel's Ambassador to the United Nations Danny Danon received The Fellowship's "Defender of Israel Award" at the gala and told JNS that in representing Israel at the United Nations, "sometimes I feel that I am alone, but I know that I am not. I know that we have millions of Christians and Jews who support Israel. And tonight is a sign of the great support that we have from different countries around the world."

The ambassador also talked about Israel's upcoming seven-decade anniversary, saying he believes it's a "miracle" that Israel has come so far and accomplished so much in such a short period of time. He told JNS.org "we are very proud of what we have achieved in the short 70 years," adding that he will be celebrating the landmark by taking 70 ambassadors from the world body on a trip to Israel.

On stage at the gala, Danon talked about U.S.-Israel relations, especially at the United Nations. He said U.S. Ambassador to the United Nations Nikki Haley once told him that as long as she is around, America "will always have Israel's back."

"[It's] the strongest alley we have," said Danon. "Seventy years later, the U.S. remains the first country to stand by Israel through thick and thin, and there is nowhere I feel that more than what I feel at the UN... Me and Ambassador Haley, we play defense and offense."

He also addressed the five resolutions against Israel passed at the United Nations on Friday, saying, "I'm telling you now, [the] U.S. will take action and Israel will take action [against them]."

Danon's late father taught him about speaking up and "standing strong" in support of Israel, he told the audience. He said, "Nowhere have I felt the importance of my father's words more than at the UN It's why I came to the UN I heard stories about this place. I didn't realize how bad it was until I arrived, but let me tell you, today we are shaking things up at the UN We are bringing a new future for Israel at the UN A new era where Israel wins."

During his speech, Harper said Trump "deserves enormous credit and congratulations" for recognizing Jerusalem as the capital of Israel. "That was one of the rare times I actually wish I was back in office, and I could've stood and done that with President Trump," he said.

The former premier additionally spoke of his "clear" and "very consistent" defense of Israel, and his "special admiration" for the Jewish state. He said his ancestors have always been pro-Jewish, and told the audience that his father was a "life-longer admirer of the Jewish people," and a "strong and vocal opponent" of anti-Semitism in Canada.

Harper discussed radical Islam and the Iranian regime, particularly the Iranian nuclear program that threatens both Israel and Western nations. He then talked about the Boycott, Divestment and Sanctions movement and urged pro-Israel supporters that "whenever we encounter [BDS], we should denounce it vocally, loudly and with every fiber of our being."

He concluded his speech by insisting that Israel is not at fault for the lack of peace in the Middle East. "It is not because of anything Israel had done or not done," he said in his final remarks. "It is not because of Israel's failures or imperfections, Israel's existence or policies... In too many countries, it is still easier to scapegoat Israel then copy its success, and it's only in Israel where religious freedom and religious toleration flourishes in the Middle East.

"I tell my friends in politics around the world, never be afraid to take the right position on Israel. And I also tell organizations like this, never be reluctant to be proud of Israel... [It is] an oasis of wealth, freedom, culture, technology and security in the most dangerous and troubled part of the world. I think Israel may be the most remarkable country that has ever been created."