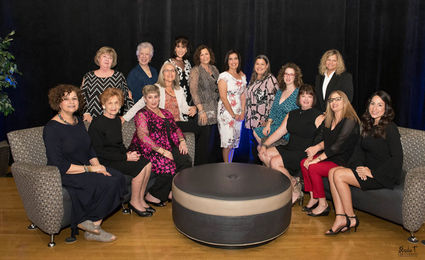 More than 350 women and men converged on the Maitland Jewish Community Campus on the evening of March 26 for Choices, a community tradition that took on a bold, new look for its 24th year.

Themed "Women Transforming Lives," this year's fundraiser in support of the Jewish Federation of Greater Orlando was all about transformations, starting with the venue, the Roth Family JCC gymnasium, which was draped, staged, decked out and lighted in dramatic fashion to create a formal yet intimate atmosphere. The production, which included a 20-foot HD video screen, was the work of AV Media, the event's Diamond Sponsor.

Visual transformations aside, Choices 2018 was, from start to finish, a celebration of women's empowerment. Co-chairs Shira Spector and Judy Kahan Davis welcomed the crowd and thanked Presenting Sponsor Harriett Lake for her support before segueing into the poignant "Lights of Empowerment" presentation. The candle-lighting ceremony was a tribute to women from 12 categories and vocations that have played a significant role in transforming the local Jewish community. A 13th candle was lighted in tribute to the Jewish women who passed away over the last few years as well as women whose names were shared in remembrance by Choices attendees. The women were the subject of a musical tribute video that concluded the presentation.

Following the video, JFGO board secretary Ming Marx, and his wife, Hilary, joined by their two young sons, took the stage to talk about their life journey and how the Jewish Federation played a significant role in helping them find a "home" in the local Jewish community through the PJ Library program, meaningful family events and the Bornstein Leadership Development Program.

After the formal program, women had another hour to socialize as co-chairs Spector and Davis announced the lucky winners of the Choices Raffle, which this year featured more than $10,000 worth of prizes-including, for the first time, reserved parking spaces on both the Rosen and Roth Family JCC campuses.

On the way out the door, women received "swag bags," take-home totes that included a sweet treat and other items from Choices sponsors, along with a special keepsake button that featured original artwork submitted by children who participate in the Federation's PJ Library, PJ Our Way and JTEN programs.

Based on feedback from previous Choices fundraisers, the Federation limited the formal program to a half-hour so that attendees would have ample time to socialize. The revision was a hit with the women who attended.

"I lost count of how many women complimented us on all the changes we made this year to Choices," said Rhonda Forest, Federation's Acting Executive Director. "They really enjoyed having the extra time to socialize and catch up with their friends, and I loved that I was able to speak with more women and thank them in person for their support of Federation."

Forest said she was also pleased that the Federation was able to have the high-profile event on the Maitland campus, which has a storied history in the local Jewish community and has long been a hub for Jewish life in Orlando.

More than 350 women and men attended the annual Choices event.

• A "Charmed by Charity" event on May 24 at Alex and Ani, 356 South Park Ave., Winter Park. During this special shopping event, 15 percent of the proceeds from all sales at Alex and Ani will be donated to the Federation. Keep an eye on the Federation website (www.jfgo.org) and the Fed Friday email in the weeks ahead for more details.

• Women in Politics, a discussion of women serving in elected office, will be presented in August by the Federation's Jewish Community Relations Council. Details and speakers are still being confirmed for this event.

You can view all the photos from Choices 2018 on the Federation's Choices web page, http://www.jfgo.org/choices.