Separated by the Holocaust, old friends find each other 76 years later 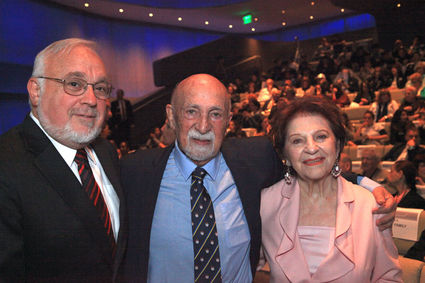 Rabbi Abraham Cooper, associate dean of the Simon Siesenthal Center, with Simon Gronowski and Alice Weit, who had a reunion 76 years after being separated by the Holocaust, at the Museum of Tolerance in Los Angeles where they were honored, April 12, 2018.

LOS ANGELES (JTA)-When Alice (Gerstel) Weit last saw Simon Gronowski, she was 13 and he was 10 and, by Alice's recollection, "the most adorable boy ever." When they reunited this week, 76 years later, "I opened the door and there he was, a frail, little old man," she said.

At the threshold of Alice's apartment here, the old friends embraced, and they wept.

"They weren't talking; they were speaking with their eyes," said Simon's grandson Romain De Mys, 24, who witnessed the April 10 reunion.

Two days later, Alice and Simon were guests of honor during the Holocaust Remembrance Day, or Yom Hashoah, program at the Museum of Tolerance in Los Angeles.

Until recently, Alice had long believed that Simon-the little brother of her childhood best friend, Ita-had perished with his family at Auschwitz. It wasn't until last summer, after a family member's Internet search turned up Simon's memoir, that she learned he had survived the war.

"I broke down and cried like a little baby," Alice said.

A few weeks later, she found out that Simon was still alive and working as a lawyer in Brussels.

Simon was just as emotional when he received an email from one of Alice's sons saying that his mother was looking to reconnect.

"I replied right away that I want to see her," Simon said.

It's no wonder, given their families' unique connection. For 10 harrowing days in October 1941, as Alice, her mother and two siblings waited to be smuggled out of Nazi-occupied Belgium, they hid above the Gronowskis' leather goods store, which was frequented by Nazi officers. The Gronowskis risked their own lives to shelter the Gerstels.

When Alice and her family left that day, "I said goodbye, but I believed I'd see them again," Simon told JTA. "At this moment, I didn't know Auschwitz."

The Gerstels managed to escape Europe, traveling through France and Morocco before boarding a ship bound for Cuba. They ultimately resettled in the United States, where Alice married, had two children and worked as a real estate agent.

The Gestapo arrested Simon and his family in February 1943. They were sent to the Mechelen transit camp, then put on a train bound for Auschwitz. En route, the train was breached by the Belgian resistance, and some passengers were able to flee. With his mother's help, 11-year-old Simon jumped from the train and escaped through the woods. His mother, Chana, and sister Ita, who was on a subsequent convoy, would die at Auschwitz.

Young Simon was aided by a Belgian police officer, and he spent the remainder of the war sheltered in the homes of Catholic families. Simon's father, Léon, also survived the war in hiding, but died shortly thereafter, when Simon was only 13.

Years on, Simon put himself through law school, married (now divorced) and had two children. An amateur jazz pianist, Simon was invited in 2014 to play alongside filmmaker Woody Allen at New York's Carlyle Hotel, where Allen performs regularly with his band.

But for decades after the war, Simon did not talk about what he had endured. In 2002 he published a memoir, "The Child of the 20th Convoy," and began speaking in schools about what happened to his family during the Holocaust. When he stood before the crowd Thursday at the Museum of Tolerance, he said he ultimately decided to share his story "on behalf of victims of all barbarities," including those who died in the 20th century genocides in Armenia and Rwanda. He also decried the pernicious forces of hate and Holocaust denial, and called democracy " a struggle of everyday."

At Thursday's event, Alice praised Simon's mother, whom she credits with saving her family.

"Your mom was the personification of the saying, 'If you save one life, you save all humanity,'" she said.

Rabbi Abraham Cooper, the associate dean of the Simon Wiesenthal Center, which runs the Museum of Tolerance, told JTA that Holocaust memory is at a critical moment, as "a generation of perpetrators, victims, liberators and bystanders are all leaving the stage of history."

"The question is how will we be remembering the Shoah [Holocaust] after the eyewitnesses are gone?" said Cooper, citing Holocaust denial abroad, the rise of far-right candidates in the United States and a new study showing that many U.S. millennials lack a basic knowledge about the Holocaust.

The study found that 22 percent of respondents between the ages of 18 and 34 had not heard of the Holocaust or weren't sure if they had heard of it. The same survey, spearheaded by the Conference on Jewish Material Claims Against Germany, also revealed that 41 percent of respondents of all ages could not identity the concentration camp Auschwitz.

Against this backdrop, Cooper said Alice and Simon's reunion "is a sign of hope, but also a challenge, a reminder to step up."

The reunion gave Simon an opportunity to connect with the closest thing he has to his lost family, said Dann Netter, one of Alice's sons.

"For us," Netter said, "it provides the opportunity to say thank you."