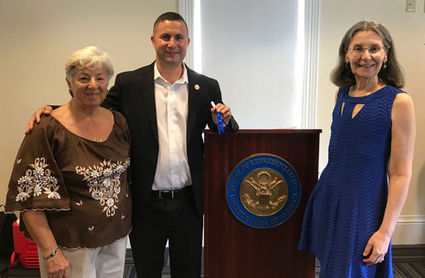 In early winter 2017, Sheri Morton, a thirty-year resident of Osceola County and a political activist, was very concerned about the upswing in anti-Semitic incidents that were occurring throughout Florida and the nation.

"I was scared," said Sheri, who is Jewish, "and so were many of my friends."

Morton's fears were supported by statistics. According to the Anti-Defamation League's report, anti-Semitic incidents in the United States had surged more than one-third in 2016 and jumped 86 percent in the first quarter of 2017. There was a massive increase in the amount of harassment of American Jews, particularly since November 2016, and a doubling in the amount of anti-Semitic bullying and vandalism at non-denominational K-12 grade schools.

Morton contacted Darren Soto, who had been elected in November 2016 to represent Florida's 9th Congressional District. Prior to being elected to Congress, Soto had served for four years in the Florida Senate and five in the Florida House of Representatives, representing parts of Orlando and the Central Florida area. Morton and Soto had been in contact throughout his political career.

"Can you do anything to help?" Morton asked.

Soto, originally from New Jersey and the son of a Puerto Rican father and Italian mother, knew many Jews from his background as well as his law practice and political experience. He suggested planning an event during Purim. The annual holiday commemorates an historical event that took place in ancient Persia in which Jews, threatened by those who wished to hurt them, survived because of the actions of Jews and non-Jews working together to defeat an evil force.

Representative Soto wished to recognize the relevance of the holiday to the current political climate. On March 12, 2017, he and his staff hosted the first public Congressional event ever held in the 9th Congressional District for the Jewish community, a Purim gathering at his office in Kissimmee. Over 50 people from the surrounding Jewish communities, including members of local synagogues and Solivita's Shalom Club, shared hamantaschen that Soto's staff provided from New York City. Joining Soto were John Cortes, who represents Northern Osceola County in the Florida House of Representatives, and Russell Gibson, Sheriff of Osceola County.

"By coming forward and welcoming the Jewish community into his office," said Morton, "Darren took a stand against prejudice and racism." Morton said that Soto's actions set an example for other government officials throughout Florida, encouraging others to work against the racist acts that have targeted the Jewish community.

The event was so successful that Rep. Soto decided to make the "Purim Forum" an annual event. On March 2, 2018, the Jewish community was again invited to his office for hamantaschen and a light lunch. Morton introduced the congressman to the group of over 60 people. Marilyn Glaser, the president of Congregation Shalom Aleichem in Kissimmee, retold the story of Purim that was rightfully interrupted with noisemakers each time Haman, the villain's name, was mentioned.

During the event, Rep. Soto shared stories of his recent visit to the Holy Land, which he detailed in a later interview with me.

Soto and other members of a Democratic Congressional Delegation traveled to Israel in August 2017 as guests of the American Israel Education Foundation, a branch of the American Israel Public Affairs Committee. The five-day tour included visits to key strategic sites, including defense and technology projects; Gaza, Syrian and Lebanon borders; the Golan Heights; Jewish, Christian, and Islamic sites; and Yad Vashem Holocaust Memorial and Museum. On Aug. 7, both Democratic and Republican members of Congress met with President Netanyahu. The goal of the visit was to learn about issues critical to the United States-Israeli relationship and international security.

Rep. Soto said that the trip was both exhausting and enchanting. He climbed up to Masada and floated in the Dead Sea. He met with traditional, secular, and Hasidic Jews; African Christian Arabs, and Muslim Arabs. While visiting the Golan Heights, he spoke to a veteran of the 1967 Six Day War while mortar fire sounded in the background. He met with a young Israeli soldier whose young children lived only three miles from the Lebanon border. "We can't afford to make mistakes," she told Soto. He also had an "eye-opening meeting" with the commerce secretary of the PLO.

Israelis garnered Soto's respect in other ways. The people are "hard working, very liberal minding regarding equal rights and democracy," he said. Soto was also impressed with "fierceness of political debate" among Israelis that is balanced with respect for each side.

Rep. Soto was surprised by the overwhelming number of olive trees the Israelis have planted. "The trees literally stopped at the Israeli border," said Soto. "To me it is symbolic of the cultivation-the sweat and toil-the Jewish people have put into the former desert."

Rep. Soto compared the Jews who came to Israel to the Cuban people, many who live in his district. "It is a sheer miracle that both groups not only survived but also were able to do so many wonderful things," he said. "We know how fragile Israel is, and the country-one of our strongest allies- requires American commitment."

Rep. Soto reflected on Israel's upcoming 70th anniversary, commenting that the milestone shows the fortitude of the Jewish people. "A strong American-Israeli relationship has fostered that security," said the congressman. "We need to make sure to continue those investments going forward."