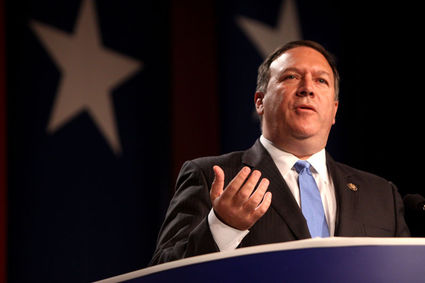 (JNS)-The U.S. Senate easily confirmed Mike Pompeo as secretary of state on Thursday, elevating the former CIA director as the nation's top diplomat amid a slew of foreign-policy challenges.

In a 57-42 vote, which included several moderate Democrats, Senate lawmakers moved quickly to confirm Pompeo, aware that the new secretary of state faces a number of serious international issues, including whether or not to remain in the Iran nuclear deal, tensions with Russia, the breaking of ice with North Korea and the ongoing Syrian civil war.

While his confirmation went smoothly, uncertainty surrounded his confirmation process within the Senate Foreign Relations Committee over objections by Democrats. However, a last-minute switch to a "yes" vote by Sen. Rand Paul (R-Ky.) staved off an embarrassing rejection by the committee.

Several American Jewish groups, including the Anti-Defamation League, openly opposed Pompeo's nomination over his views regarding Muslims. The ADL claimed that Pompeo had "demonstrated a consistent pattern of casting doubt in the minds of constituents about the trustworthiness of their Muslim neighbors."

Following his confirmation, the ADL wished Pompeo success in his new job.

"Now that he is Secretary of State, Mike Pompeo will have an opportunity to play a leading role in shaping American foreign policy-to help build respect for the United States around the world and help to ensure its security," said ADL CEO Jonathan A. Greenblatt.

Nevertheless, the group urged Pompeo to uphold his pledges made during the confirmation process, including "to manage affairs of state fairly and equally, defending the human rights and dignity of every U.S. citizen and State Department employee, and his assurances about the importance of U.S.-Israel relations, denying nuclear weapons to Iran and promoting Middle East Peace."

The American Jewish Committee also congratulated Pompeo on his confirmation.

"As longtime admirers and supporters of the State Department's defense of American interests and values across the globe, and as proud civil society partners in that vital mission, AJC congratulates you on your swearing-in as Secretary of State," said AJC CEO David Harris.

Both the ADL and AJC urged Pompeo to assign a Special Envoy to Monitor and Combat Anti-Semitism as soon as possible.

"Given rising anti-Semitism globally, we urge Secretary Pompeo to appoint a qualified person to serve as the congressionally mandated position of anti-Semitism envoy as one of his first orders of business," said Greenblatt.

Almost immediately after his confirmation, Pompeo was set to fly to Brussels to attend a NATO foreign-ministers trip. The new top diplomat will also visit several other countries next week, including Israel, a senior Israeli official told Israel's Channel 10 news station on Thursday.

It was also rumored in recent days that Pompeo could also lead a delegation to Israel next month to open the new U.S. embassy in Jerusalem.